Sports are as much about passion as they are about winning and losing. We don’t usually expect the sportsmen to be throwing punches at each other in games which don’t really have any ring to fight in but few of the incidents that we will be discussing today show how some players have no regard for our observations. Who doesn’t like a little banter in a game but bruised faces and maimed arms are certainly not the right kind of advertisement for sports. Let us go down the memory lane and reminisce few of the moments when players turned physical with each other in sports other than ring boxing and 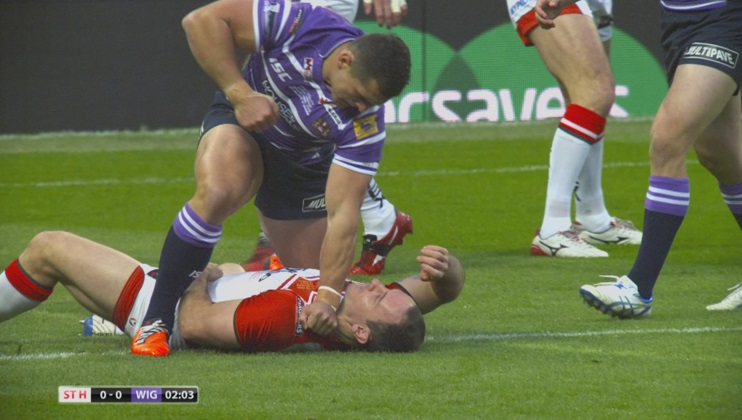 Rugby is one of the most physical sports around but even with the physical/competitive nature players tend to behave most of the times. But in a English rugby’s super league final at Old Trafford, Manchester infront of 76,000 people Wigan Warriors Ben Fowler knocked out Lance Hahaia of st Helen with a devastating punch in the face but to make things even worse he punched him again while Hahaia was already unconscious. Ben Fowler was suspended by Wigan Warriors and handed at 6 months ban. 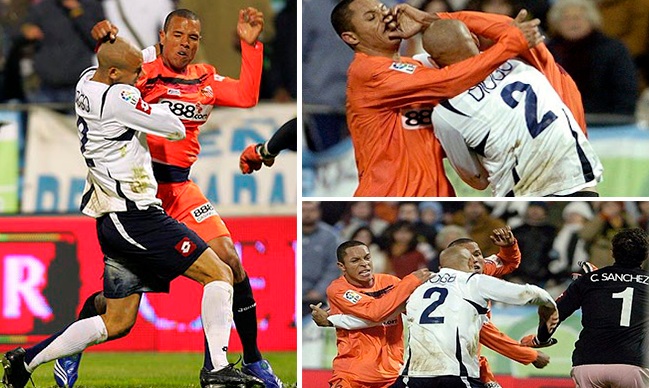 Football is a physical game but in most occasions even when the tempers are boiling players tend to control their emotions however in Spanish La Liga game between Sevilla and Real Zaragoza a full fledge fight broke out between Luis Fabiano and Diego. It all started off argument about a challenge but things accelerated quickly when Diego punched Fabiano in the face and after that it was pretty much a boxing match between the two. 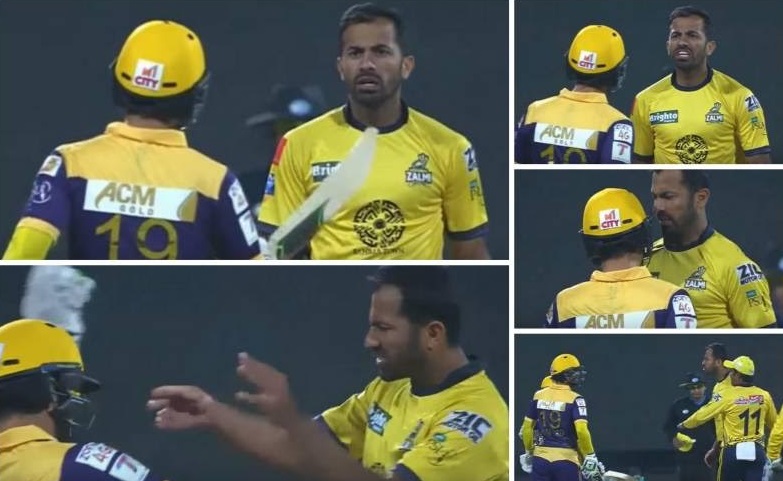 This duo is a perfect example of how heat of the moment can blind sportsmen of all relationships including friendship. In the inaugural edition of Pakistan Super League, the Pakistani duo got involved in an ugly spat on the field which quickly turned physical. Wahab is a genuine speed star who isn’t known for having the coolest of heads on his shoulders. Playing for Quetta Gladiators, Ahmed Shehzad deposited Peshawar Zalmi’s Wahab Riaz for a massive six over long on in an important league match.

Wahab got his revenge on the very next bowl by sneaking one through Shehzad’s defenses. The Pakistani speed star made sure that Shehzad got the memo informing him about who the boss was. Now this is where things went haywire. Shehzad made a mistake which he surely would have rued later that night. He showed his bat to Wahab in an outwardly aggressive and derogatory way to which Wahab responded by a barrage of abuse and didn’t shy away from shoving Shehzad to the side. Both players were fined portion of their match fees and after mediation by stars like Shahid Afridi both of them are at good terms with each other. At least this is the impression they are giving to the media. 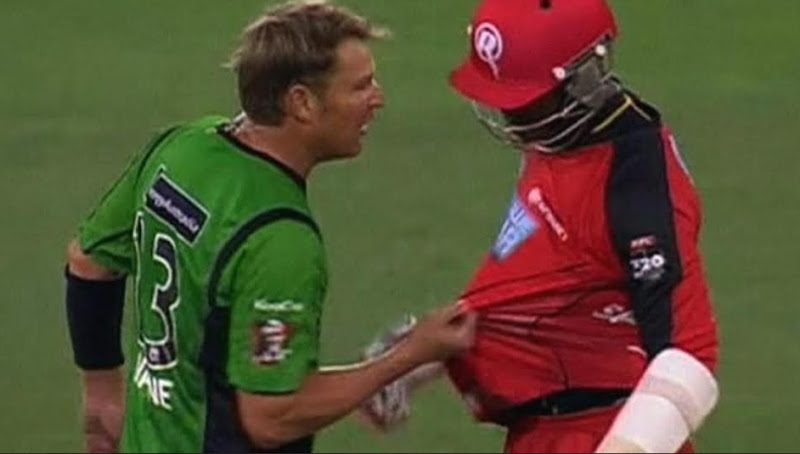 Warne has never been the most disciplined of Australian cricketers. One of the legends of the game, Warne never shies away from speaking his mind out and letting his opponents know that he is in it to win it. While captaining Melbourne Stars in a match against Melbourne Renegades in Big Bash T20 league, Warned ended up launching a diatribe against West Indian Marlon Samuels. Samuels had earlier grabbed Warne’s team mate Hussey while he was trying to go for a second run during the first innings. When Samuels came into bat Warne made sure that Samuels knew of his anger at his action. At one instance Warne even went as far as grabbing Marlon Samuels’ collar, a move which really ticked off Samuels who in the next over threw his bat at Warne. 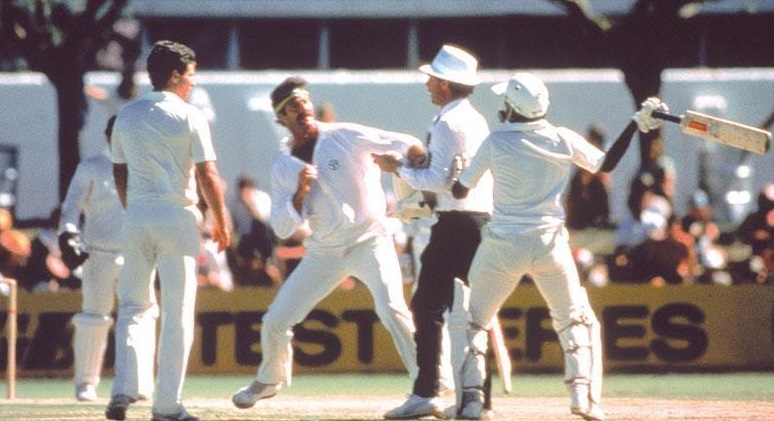 Lilley and Thomson were the Draculas of cricketing world. In an era when batsmen used to bat without any safety equipment of consequence, these two bowlers had instilled their fear in the hearts of almost all batsmen. But there was this young fellow from Karachi who remain undaunted. Neither Thomson’s express pace derailed him from his mission nor could Lilly’s antics on the pitch deter him from scoring fluently. Miandad was captaining Pakistan in a series in 1981-82 when this fight between Lille and Miandad broke out. Both players had antiparallel stances on the issue but there was almost a consensus even in Australian media that the blame lied with Lillee who first intentionally blocked Miandad’s way as he tried to scramble across the pitch for a single. An exchange of harsh words took place and all of a sudden things got out of control. In visuals that were being beamed across the globe, players could been seen vying to hit each other. Miandad raised his bat to attack Lillee after he was kicked by Lille in a disgraceful incident. This incident resulted in a tarnished image of both these players. 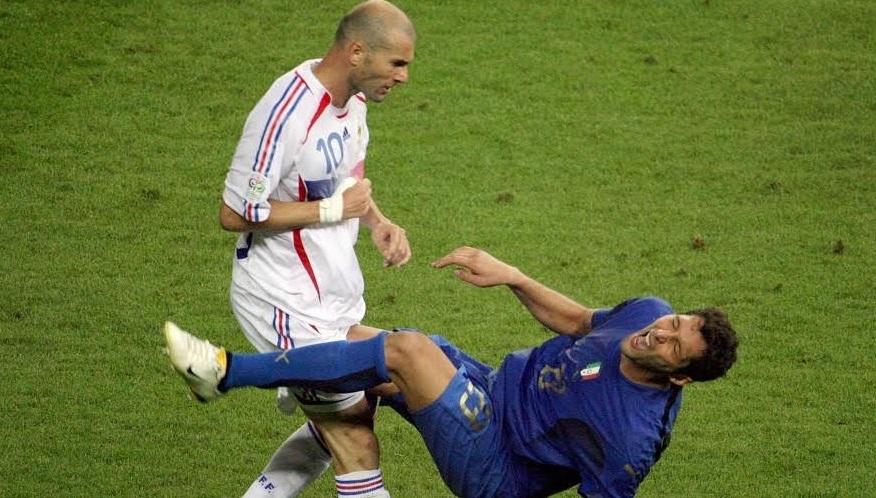 The current Real Madrid Manager and former captain of the France’s football team, Zinedine Zidane scored a goal in 2006 FIFA World Cup’s final to become only the 4th player to have scored goals in more than one FIFA World Cup finals. But there is more to the story. Zidane was shown a red cared in the 110th minute of the all-important game, a moment when both teams were heading towards penalties, Zidane lost his composure and knocked opposition’s Marco Materazzi on the ground with a header. France lost the final on penalties in which Zidane couldn’t participate in. This assault by Zidane made headlines across the globe. Later it transpired that Materazzi had disrespected Zidane’s sister. In a statement Zidane said that he would rather die than to apologize to Materazzi for the incident. 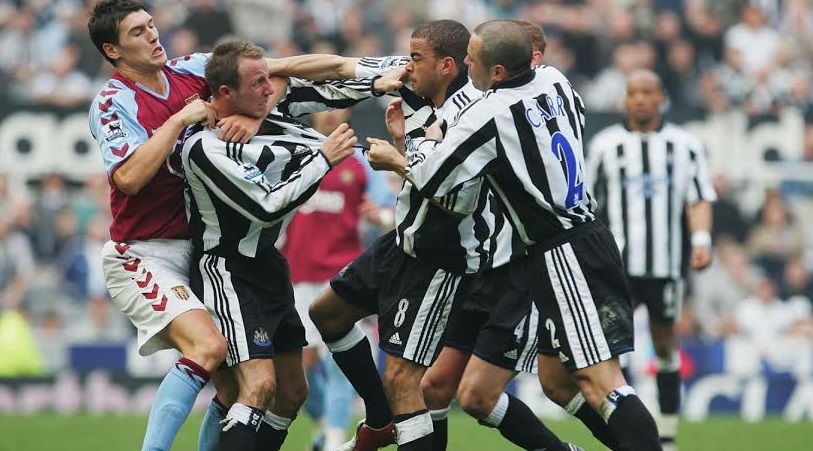 Who needs enemies when you have friends like Lee Bowyer. All the incidents we brought to you had occurred between players from opposite sides but that is just too mainstream for our guy here. In a match against Aston Villa, while playing for New Castle United Lee Brown brought disgrace to his club after launching a chain of punches on his own team mate Kieron Dyer. Yes, the guy didn’t care about the 50,000 spectators watching him go at his own team mate. Both of the players were shown red cards for their on field drama. No prizes for guessing how the match ended. New Castle United lost it 3 goals to none.

Baseball like cricket is not much of a contact sport but americans some how find a reason to start getting physical every now and than. Here is a small compilation of some nasty fights on baseball field.