Athletes and players workout day in and day out, maintain a grueling fitness timetable, adhere to that schedule religiously. They put themselves through such harsh routines for one goal, one dream: To represent their country at big tournaments, to strike gold in the tournaments when it really matters. No training schedule is gruesome enough to evoke a grimace of pain on the faces of these athletes. But one thing which can engulf the minds and bodies of these players in indescribable pain is the news of their inability to feature in the tournament they had been doing all this preparation for.

It is a routine for us to hear about footballers who were sent packing their bags for flight home just before the kicking of World Cup or Euro CUP. An eyebrow or two get raised when this happens to any major star player, but what about that youngster from the stanching alleys of Mexico who was about to star for his country for the first time in any major tournament. As hard as it is for that player to get to terms with this reality but general public doesn’t care a lot about it.
Let us get to know few of these players who got sent back home – either because of their own fault or because of their not so great luck – just prior to beginning of any major tournament.

He has a dazzling record to boost for. A genuine threat for the batsmen whenever he had the cricket ball in his hands, Shane Warne had to make arrangements for his early return home before the start of the Cricket World Cup 2003. Australia eventually did go on to win that World Cup in South Africa after an emphatic win over India in the final but they surely could have used the services of their spin maestro, Warne, had his results not tested positive for the use of illicit drugs. Warne not only missed on a chance to claim some scalps in the world cup but was later penalized in the form of suspension form sport. 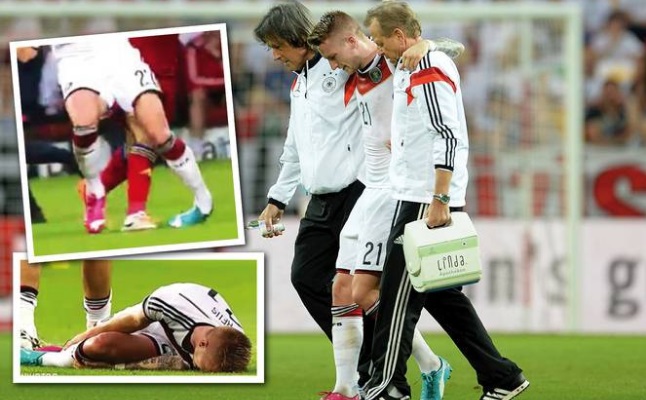 It is hard to imagine that a manager of a team would be upset after is team has demolished the opposition by a humongous margin of 5 goals. But this is exactly what Germany’s manager Joachim low was, a picture of despair as he interacted with media after Germany’s friendly match against Armenia just days ahead of 2014 FIFA World Cup. What fueled his despair was the injury of star German attacking mid fielder and striker Marco Reus who got sidelined for 6 weeks just before the big tournament’s start. Much to Reus’ frustration he had to fly back home to Germany and got replaced by another attacking mid fielder, 22 year old Shkodran Mustafi. Germany eventually went on to win the world cup and the star of the final, Mario Götze was scene posing holding Reus’ shirt which again resounded how important Marco Reus was to that squad.

Hailing from the Potohar region of Pakistan, Shoaib once referring to the unevenness of the land he was born and bred in said “We are uneven people like Rawalpindi’s land”. What he was implying here was that if one stays friendly with him, he replicates the gesture with similar friendliness but is someone tries to poke him then he can unleash his inner violent side to take the opposition to the cleaners. The fastest bowler to have ever walked on cricket’s field, Shoaib Akhtar got a seat on early flight back home from South Africa just before the start of Cricket’s first ever T20 World Cup. This ostensibly was the time when Shoaib was at his prime and was rattling stumps at will. His performances during the warm up watches were a spectacle for the eyes so what lead to his early return to Pakistan? Shoaib Akhtar, as loose tempered as he has always been, got into an altercation with fellow fast bowler, Muhammad Asif. Tempers flared high and Shoaib took a jibe at Asif with a bat. Not too happy after getting a beating by Akhtar, Asif rejected to play alongside Akhtar and since Asif too was an important member of the team by 2007. The management had to send Akhtar back home and Akhtar could never represent Pakistan in any of the future T20 World Cups. 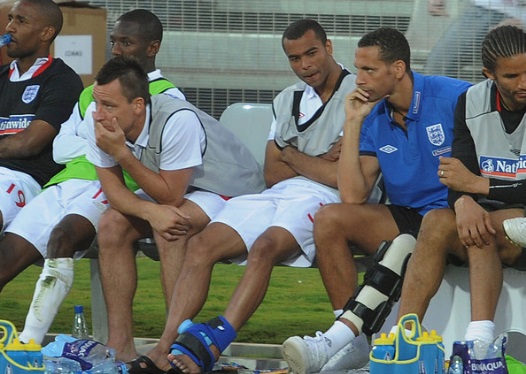 After English football administration had stripped Terri of captaincy, they deemed Rio Ferdinand a man good enough to lead England in the FIFA World Cup 2010. Rio who was not having a great time dealing with the injuries in the lead up to the world cup was in shape to represent England before the team’s first training session in South Africa. Rio got injured in a challenge with striker Emile Husky in what was a normal tackle. Tests showed that Rio had damaged his knee ligament and was advised to stay on the sidelines for the next 6 weeks effectively crushing his world cup dream. He was sent back home days before the world cup and Michael Dawson was called in as his replacement. 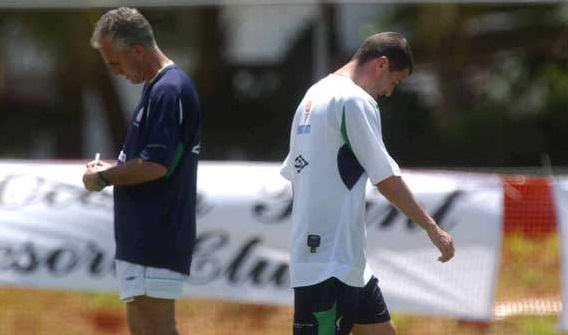 The infamous “Saipan incident” happened back in 2002 just before the World Cup in Korea-Japan when Republic of Ireland’s most high profile player and Captain Roy Keane was sent home after public quarrel with national team coach Mick McCarthy. The reason for such drama just before the biggest tournament was Roy Keane being highly critical of Ireland’s preparations which included travel arrangements, players diet and competency of the national team coach.

By the time teams were arriving India for the 2006 Champions Trophy, one bowler who had already created an impression of being deadly swing bowler was Asif. He had made life miserable for the likes of Tendulkar, Sehwag, Dravid and Laxman in the test series against Pakistan and had all the intentions to replicate his performance at the big stage but just days before the kicking off of Pakistan’s campaign against Sri Lanka, result of Asif’s dope test came in declaring him guilty of using banned performance enhancing substance. Asif was sent packing his bags and immediately left for Pakistan without bowling a single ball. His absence costed Pakistan big time as their campaign in the Champions Trophy was very short lived and ended without entering into the Semi Finals. 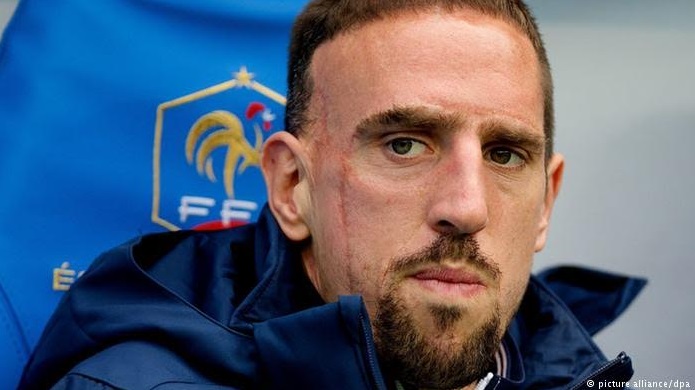 Voted as the world’s third best player of 2013 after Cristiano Ronaldo and Lionel Messi, Franc Ribery was instrumental in France’s qualifying campaign to the world cup as he scored 5 goals. But the back pain that he had sustained for much of the preceding season became too much to handle in a training session before world cup. He was taken out of the training session and sent for MRI, the results of which clearly indicated the aggravated situation of his back. The coach announced that Ribery wouldn’t be able to join a training session for dew weeks let alone play a game. Ribery was sent back home without featuring in a single game in the world cup 2014. 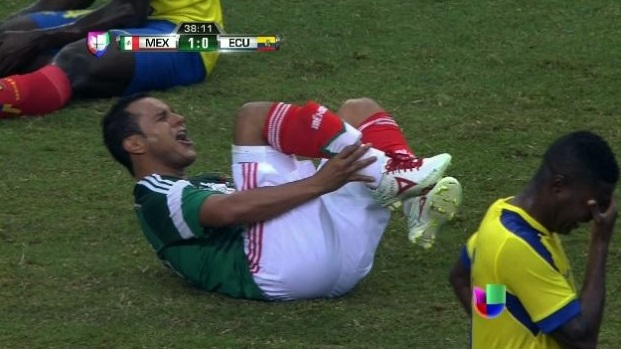 In Mexico’s last friendly match before the 2014 world cup against Ecuador, Montes scored a goal in 33rd minute but little did he know that his world cup campaign was about to get over in the next 3 minutes. Montes was involved in a clash with Segundo Castillo leaving him unable to walk. He was carried off the field on a stretcher and was taken to hospital where tests showed that he had fractured his leg. Castillo too limped off the field but he was lucky that unlike Montes his world cup campaign didn’t end before the start of the tournament.