EFL Cup 2017 winners will get a mere £100,000 in prize money while the runners-up will pocket £50,000. Below is the entire breakdown of EFL Cup 2017 prize money plus how the gate receipts payments are distributed among participants according to home/away rules and how much every team get for live match. 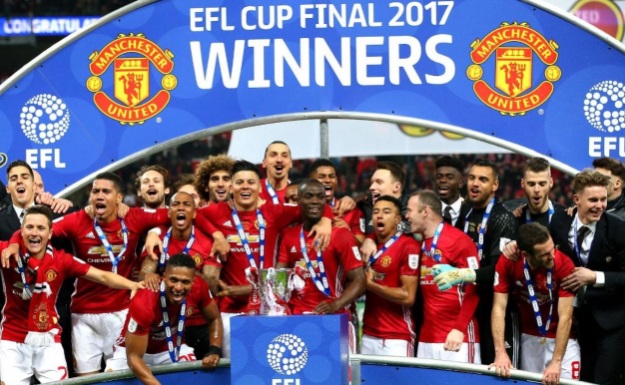 Manchester United defeated Southampton in the League Cup final to win 2017 Caraboa Cup (also known as EFL Cup). But how much do the League Cup winners get in prize money ? Well not alot in fact its a mere £100,000 which is awarded to the team by English FA while the runners up get around £50,000 which is almost the average weekly wage of a player in premier league.

How Much A Team Can Make In EFL Cup ?:

Gate Receipts and TV Money: But the biggest chunk of the money comes from the gates receipts as Each finalist gets 45% of the wembley final ticket money. Couple of years ago when Bradford reach final they made around £1million in gate receipts and television cash. Manchester United pulled more crowd and higher TV money and should have made a well over £1 million each from the semifinal and final appearance in 2017 tournament.

The sharing of gate receipts start from the first round matches every matches gate reciept is shared 45% each
between both home and away clubs while 10% goes to FA. That is why some time lower league teams are over joyed when they draw a top premier league side away. MK Dones defeated Manchester United in the early rounds of capital one cup couple of seasons ago and they got around £1.7 million share in gate receipts at old trafford. Which is massive amount for such a small club.

So a good run of results for a lower league side in the EFL Cup can bring them good results and if they can turn the odds win the cup they can also get a place in Europa League.

That is why Premier League teams dont take the cup seriously and mostly give chance to fringe/young players in the cup run and who can blame them, The survival in premier league will earn a team atleast £100 million and it will jump to in the region of £150 million from 2016-17 season with new tv rights deal for premier league