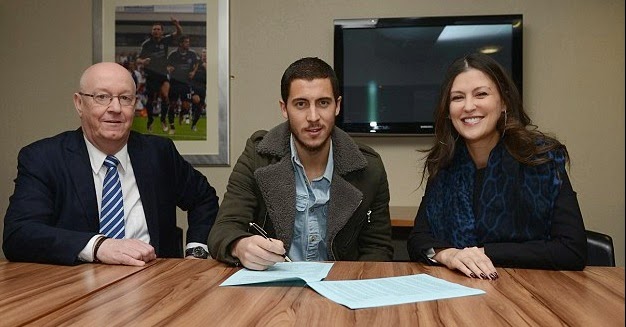 Chelsea’s best player this season and in the last couple of seasons, Eden Hazard has signed a 5 and half year extension deal with the club putting to bed all speculations that he will be moving away from Stamford Bridge in the summer. The contract extension is very lucrative deal for PFA Young player of the year 2014 which will make him one of the highest paid players in premier league and one of the top 10 in the world.

5 year deal is worth a massive £57million in total including weekly salary of £200,000 a week plus bonuses and performances related add ons. He new contract will last till June 2020. Is this is the sign of things to come with Premier League signing a massive £5.136 billion 3 year domestic tv right deal ? lets take a closer look at his new contract & old contract with Chelsea football club.

He arrived in Chelsea from Lille (France) and has made himself integral part of Jose Mourinho side. He has started each and every premier league game this season winning the trust of manager and the fans.