Age: 38
Average Early Earnings: $70 million (last 8 years)
2015 earnings: $300 million
Major Endorsement: None
Endorsement Earnings: mayweather dont have any endorsement deals, but he do has his own clothing brand called “TMT”
World Highest Paid Athlete: Floyd Mayweather has topped the “Highest paid athlete of the year” for last 4 years consecutively and he is set to top the list agains this year.

The highest paid athlete in the world of sport, Floyd Mayweather Jnr net worth is believed to be around 400 million and with the fight against Conor McGregor confirmed and not far off he will be making atleast $150 million guaranteed from his nights work come 26 August 2016 in T-Mobile Arena in Las Vegas which will be the biggest boxing fight of the year expected to make around $300 million in revenue. Purse split is 60-40 in Mayweathers favor and regardless of the result in the fight Mayweather is set to clear what could be his last purse on his professional career.

So Floyd Mayweather is doing great money wise and he is a smart business man who can handle his cash better than some of the other great boxers who went broke even after earning huge incomes. Here are his purse and total earnings from the last 11 fights of his career.

The breakdown of Mayweathers last 11 fights which he really became a PPV superstar defeating Oscar De La Hoya in a fight where he earned $25 million of what was one of the biggest fights in boxing history.

His total career earnings from his boxing fights has reached over $450 million already before the McGregor fight and you can add another $150 million to it for the August 2017 fight which will be the biggest on every scale (Gate receipts, PPV buys, largest fight purse in history and what not). 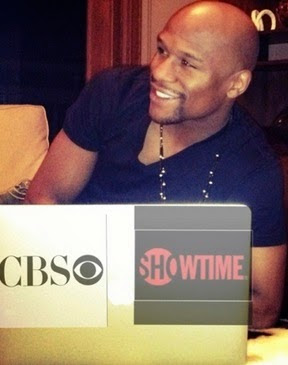 Floyd Mayweather signed a massive 6 fight deal worth around $300million with Showtime boxing and the Pacquiao fight will be the fifth in the contract. He has already made a fortune but now Showtime wants to cash in by getting Mayweather in the ring with Manny Pacquiao and hopefully another top fighter to milk some cash of Mayweathers back.

According to Forbes, Mayweather earned 105 million in his last two fights against Marcos Maidana making him the highest paid athlete of 2014. Mayweather is sure to top the Forbest richlist again next year because not only he will earn the biggest purse in history of boxing but he will be fighting against in September 2015. 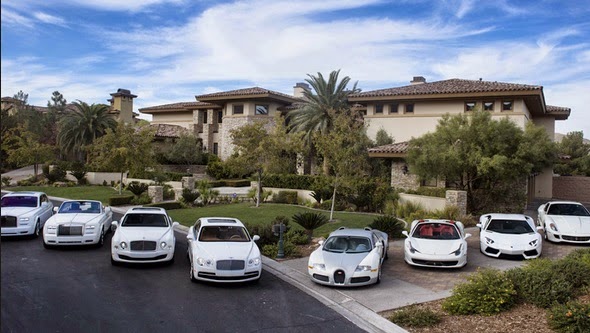 You know that they guy is stacked with money when he calls a showroom at 03:00 am in the morning and ask to have a brand new Bugatti in his garage within next 12 hours. Apperently thats what Mayweather did according to a showroom manager. Mayweather has two fleets of cars one in white colour located in his adopted home Las Vegas while the other in his native city.

This picture pretty much sums up how luxury lifestyle Mayweather lives in, a $30m worth of Jet plus high end sports cars.

Mayweather also has two big mansions, the first in his adopted home Las Vegas which is shown in the picture below while the other one is in Miami. 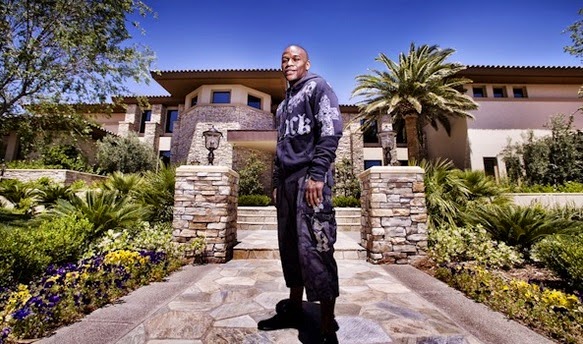 Apperently when Mayweather likes a car he usually buy two of them one in preferably white colour for Las Vegas while the other model for Miami which are usually black or blue cars. 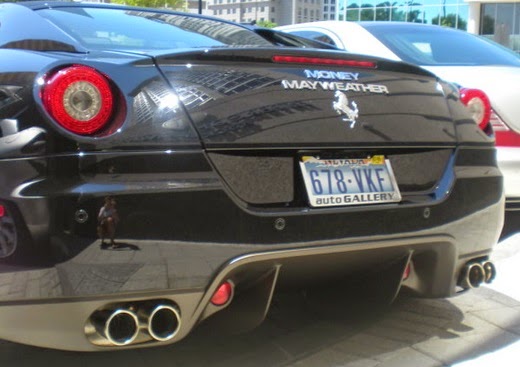 Unlike some other rich dudes or celebrities Mayweather only use one bank account and he showed a balance slip back in 2014 which indicated a $123 million balance in his account. put together value of his Mansions, cars, jets, Jachets, Promotional company and his own business an apperal company called “The Money” and you can see why his Net worth is around $400 million.