Lionel Messi extended his contract with FC Barcelona till 2021 and the announcement was made back in July 2017. With the new deal, Lionel Messi became the second highest paid player in the world with his  £500,000 a week just behind Shanghai Shenhua’s Carlos Tevez. We take a look at Messi’s career off the pitch and how he became the most marketable footballer alongside Ronaldo.

Lionel Messi has been the best footballer by far in the last 10 years and his current professional contract with FC Barcelona makes him the highest paid footballer in the world as well. Having won 5 Ballon d’Or (FIFA Player of the year) awards in last 7 years and constant success and the pitch makes him one of the most marketable athlete in the world. Unlike top athletes in other major sports, Lionel Messi has the marketability all over the world resulting Messi signing a massive $50 million a year contract with Adidas.

Messi is one of the highest paid footballer in the world earning slightly more than Ronaldo. His current Barcelona deal earns him around £26.4 million a year after tax which means he cost around £50 million a year to Barcelona if we take into account 52% tax in spain.

Lionel Messi has a unique contract with Adidas where he is the face of world’s second biggest sports brand earning in region of $40 million a year with his current Adidas deal. Messi also has number of other endorsement deals in different niches. Only Ronaldo can upstage Messi in terms of Endorsement deals and yearly income.

We take a deeper look at how Messi became the highest paid footballer in the world having signed 7 contract extensions with Barcelona since 2005.

Lionel Messi Salary History: Messi came to spain back in 2000 when his family arranged an trial with FC Barcelona in December 2000, aged just 13 years he officially became Barcelona youth team play in February 2001. Club agreed to pay his medical bill of $1000 a month plus provided accomodation for his family who moved to Barcelona. Well he never looked back and made his first appearance for Barcelona at the age of just 16 year old in a friendly game against Porto in 2003 and he signed his first professional contract in February 2004 an 8-year deal earning a mere €1500 a week. Below is the entire history of Lionel Messi salary with Barcelona.

Lionel Messi Endorsement Deals: Messi is the highest paid footballer in the world with massive yearly salary but he is doing even better outside the pitch with his lucratve endorsement deals with the likes of Adidas, Pepsi, EA Sports, Samsung, walkers and got knows how many other domestic and international deals. He is making around $24 million a year with his Adidas deal while racks in another $5 to $8 million with his other endorsement deals. 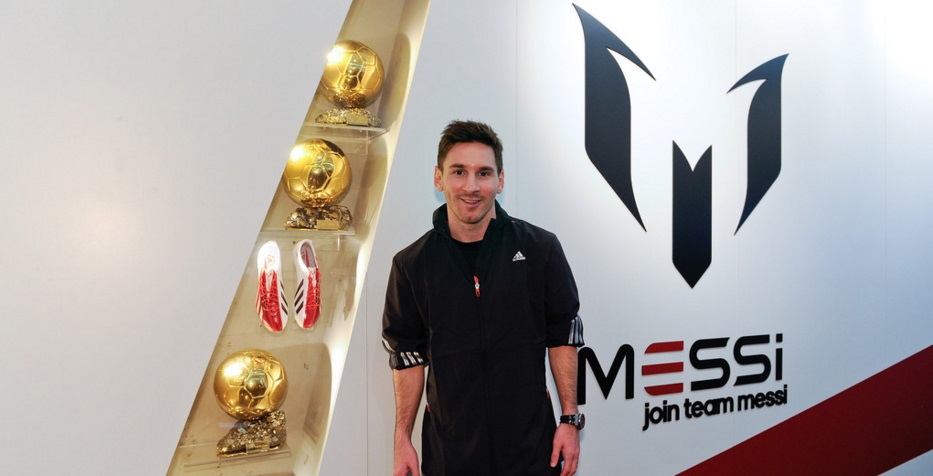 Adidas has a whole soccer cleats series under Messi banner and every year multiple new Messi boots are released.

So looking at his current professional contract with Barcelona and his endorsement deals he is making around $70 million a year in annual income making him the second highest earning footballer in the world. Here is the list of other top 15 highest paid footballers in the world.