Adidas signed the most expensive kit contract in history of sport when they reunited with United in a 10-year deal worth £750 million thats £75 million a year and the deal is already paying dividends as the new 2015-16 home kit was launched saturday, 01 august and the first week sales has broken all previous records leaving Adidas bosses staggered and excited with the demand shown by United fans.

In the first interview post kit release Adidas representatives stated that “the new kit sales has taken both club and adidas distribution channels by surprise as it not only exceeding expectations but broke record by 50% more sales in first week of kit release in both United stores and through adidas channels“. What is interesting here is the fact that kit release has not even made it to the first match-day where usually sales soar.

Last season which was the final year with Nike contract, United shirts were sold the most in premier league and only second behind Real Madrid in terms of global sales. In premier league last season Rademal Falcao and Di Maria shirts were sold the most and it will be interesting to see which name gets the most sales this season as United have made couple of high profile signings but not as big as Falcao or Di Maria.

Adidas will be revealing United’s away and third kits on 11 August 2015. From the first week sales and United’s global appeal Adidas seem to be happy to fork out on a record breaking deal which sees united earn almost double the money from kit deal compared to any other club. 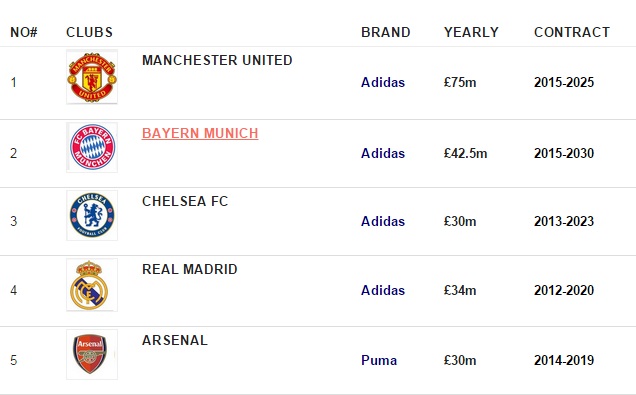