2015 is a massive year for sports industry and with so many major competition taking place across different sports, fans will have a feast throughout the year. Towards the end of 2015 we will have Rugby World Cup 2015 which will be taking place in England and it is widely regarded as the 2nd biggest team sport world cup behind Fifa world cup. Early indications are that RWC 2015 England will be the biggest in terms of revenue for IRB (International Rugby Board) and set to generate massive revenue compared to last couple of world cups. We take a look at some numbers showing why this will be the most lucrative rugby world cup in history.

Four years ago Rugby world cup 2011 in New Zealand generated around  £253 million in total revenue and early expectations from 2015 world cup in England is that tournament will have a massive impact on UK economy and more than  £400 million is expected in revenue.

We take a look at past 4 world cups and how they generated revenue through different channels and compare them with the upcoming world cup in England.

NOTE: money from the gate receipts is kept by the home rugby union hosting the world cup.

In september 2014 when the ticket went for sale in the first phase a total of 950,000 tickets were sold in just one month which goes to show demand for tickets, while 340,000 ticket has already been sold through rugby clubs in England and Wales which is part of Rugby Community Programme.

Official supporter tour package is another lucrative source of income where 160,000 packages has already been sold expected to break the previous 184,000 package sale record set in 2007 world cup.

A massive £80 million guarantee to the IRB which will be paid by england and wales rugby unions for successfully winning the hosting bid for 2015 world cup. There is a 30% increase in the tournament fee compared to £55 million pad by New Zealand four years ago.

All in all as the things stand Rugby World Cup 2015 is set to be the biggest rugby world cup where atleast £1 billion is expected to go straight to British economy, while IRB will make huge revenue and fans will be treated with some superb international rugby action. In terms of attendance Rugby World Cups has been second only to FIFA World Cup and 2015 RWC is set to be one of the most attendance competition on planet. 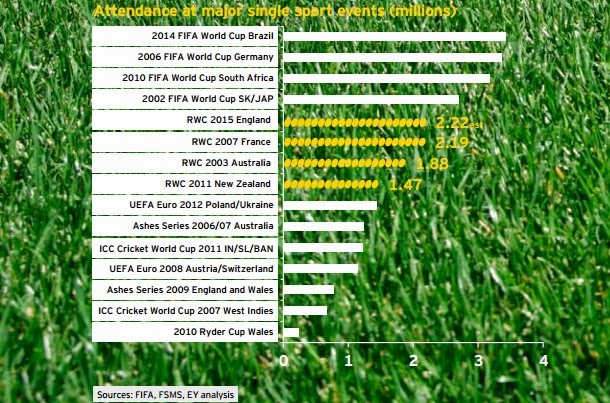