British MotoGP grand Prix 2017 takes place this weekend from Friday, 25 August to Sunday, 27th August 2017 at the Silverstone circuit in England. It will be the 12 round of 18 scheduled this season and after 11 grand prix’s Marc Marquez has established himself at the top with 174 points and thats 16 ahead of Ducati’s Andrea DOVIZIOSO who has 158 points followed by Yamaha duo of Maverick Vinales (150) and Valentino Rossi (141). British grand prix is important race and Vinales will be hoping to repeat last year’s success on this track come Sunday, 27th August

After the first 11 races of the season, Marc Marquez has put himself into a position where he can kick on to claim his fourth world title. He leads the championship by 16 points and with only 7 more races to go all he need to do is be consistent like he has been this season even without winning specially if we keep getting different grand prix winners. Although there is not a major points difference between 1st to 5th place but as the season move to its business end every point is vital in the championship race.

Having said that Carl Crutchlow’s win at Brno was classic race and it was 6th race in a row with a new winner and we can excpect something similar this weekend. Below is the results from last year’s race and we will be updating more after the 2016 British MotoGP. 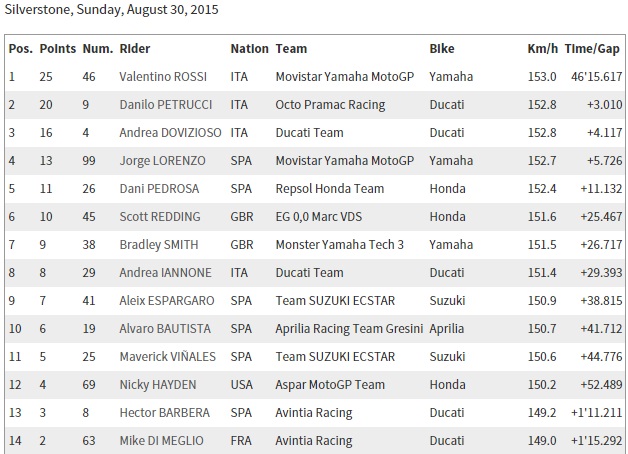 Marc Marquez again claimed a pole position at the British MotoGP qualifying while Jorge Lorenzo and Dani Pedrosa finishing 2nd and third while Valentino Rossi is set to start in second yet again as he finished fourth in the qualifying rounds. This British grand prix might prove to be a very important race with Valentino Rossi and Lorenzo tied at 211 points. 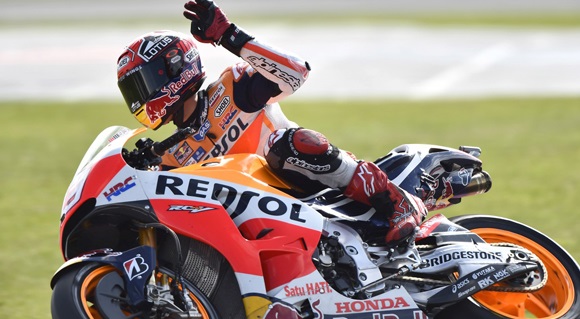 British MotoGP Qualifying Results:
Marc Marquez was the fastest on friday and he hit the pole position record with 2m 0.234s and a top speed of 322km/h, Marquez will be favourit going into the Sunday British GP with Lorenzo looking to out pace and out position Valentino Rossi in the drivers championship. 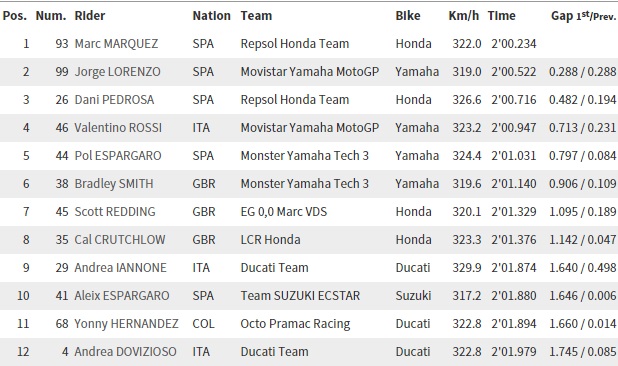 Ducati riders Andrea Iannone and Andrea Dovizioso finished 10th and 12th respectively finishing of their miserable week and will start at the back of the grid.