MotoGP season gets into full flow as French MotoGP takes place at Le Mans this weekend starting with Friday practice sessions. The coverage begins at around 09:00 am uk time and we will have live coverage throughout the weekend right here. The big race takes place on Sunday, 21 May 2017 and MotoGP race itself begin at around 12:00 uk time.

Rossi now has 113 grand prix wins in the premier class and his dominant victory in Spain surprised quite a few people as he raced from flag to flag and win his first grand prix of the season. But his win came after careful planning from his team/crew who successfull predicted the weather/track conditions which helped Rossi to take first on the podium. 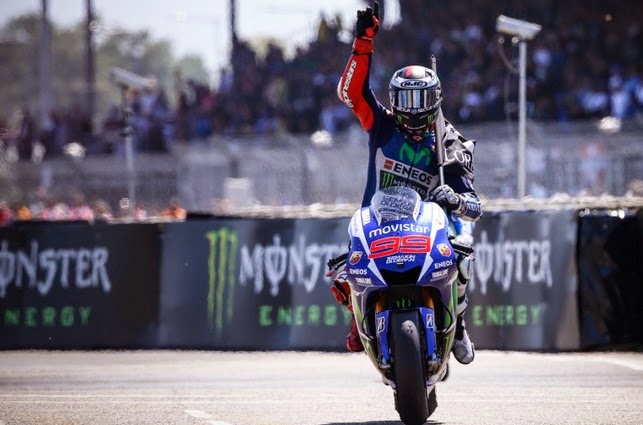 Having said that Lorenzo will be favourite going into the French MotoGP as he has superb record at this track having won 4 races here since 2009 while Rossi’s last win at this circuit game back in 2008.

Jorge Lorenzo has won the 2015 French MotoGP, having started 2nd on the grid behind Marc Marquez he lead from first corner to the finish line. Valentino Rossi made it one two for Yamaha as he finished the race as runnerup behind teammate Lorenzo. Marc Marquez was left disappointed with his 4th place finish having started in the pole position. 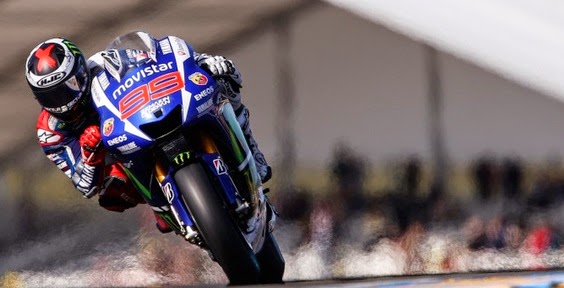 French MotoGP 2016 Results: The race is schedule to start on Sunday, 08 May 2016 and we will have live updates and results during and after the French MotoGP.

Its been quite a start to 2016 season with 3 different winners in first four grand prixs and that kind of opened up the season and this Le Mans MotoGP will be crucial as a win for Marquez will take him further away from the following pack while Rossi can put his dominance by winning back to back grand prixs. Marc Marquez managed to get the pole position after the French MotoGP qualifying rounds on saturday afternoon in Le Mans, While championship leader Valentino Rossi will start on the seventh place in the grid for Sunday’s very important race in terms of championship standings. The weather was not so kind on drivers before the saturdays qualifying sessions as a heavy downpour in 3rd and 4th practices sessions left the surface greasy. Dovizioso and Jorge Lorenzo managed to get 2nd and 3rd place on the grid for Sundays race beating off the challenge from Cal Crutchlow Andrea Iannone who finished 4th and 5th. Valentino Rossi had to delay the use of his new bike because of the rain ahead of the qualifying as he finished 7th and will be started in the 3rd row.

French MotoGP 2016 Highlights: Lorenzo won the spanish grand prix couple of weeks ago and he will be eager to provide solid challenge for the French MotoGP. The race is set to start at around 13:00 UK time and we will be placing live results and highlights of the full race right here immediately after the race is over.

French MotoGP 2015 – Qualifying Results:
Even after facing some traffic problems during his last couple of laps in qualifying, Marc Marquez claimed his second pole position of the season and will definitely be the favorite to go all the way and win the race come sunday afternoon. Valentino Rossi on the other hand will have his work cut out as he will be started 7th in the grid, he will be looking to avoid any set back at the start of the race and hope to get a few points under his belt having already accumulated 82 points so far after four races. Here is the saturday, 16th May 2015 qualifying results. 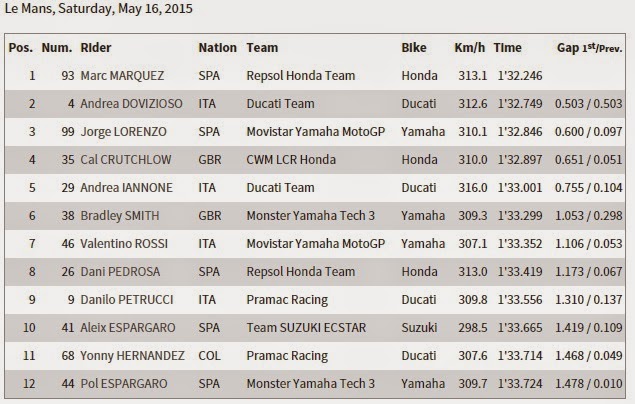 Jorge Lorenzo raced to 2016 French MotoGP win on Sunday, 08 May 2016 at Le Mans. Having started at the pole position he produced a masterclass of a performance to win his 5th French motoGP since 2009. 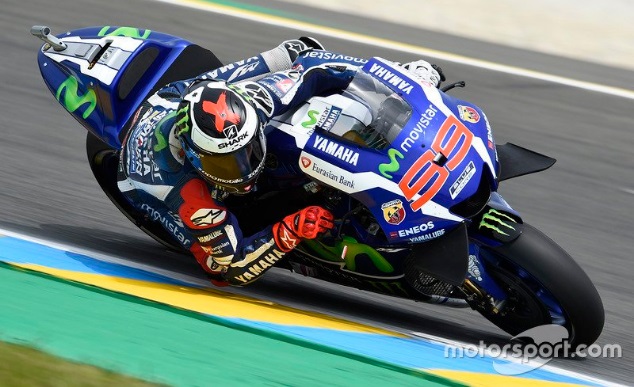 French MotoGP 2016 Results: Jorge Lorenzo now go top of the riders standings with a impressive win in France, his second grand prix win of the season which takes him to 90 points, 5 ahead of Marquez who crashed at Le Mans and failed to finish the race. Valentino Rossi finished second ahead of Maverick Viales.