Sixth MotoGP grand prix of 2017 season gets underway on Friday, 02 June 2017 in historic Mugello circuit in Italy and its a massive race as far as the top of the drivers championship is concerned. Maverick Vinales has taken the early lead with 3 grand prix wins so far and leads the table by 17 points after accumulating 85 points while Dani Pedrosa has overtaken Valentino Rossi into second place. The Italian MotoGP race takes place on Sunday starting at around 13:00 uk time and we will have live links and full race replay.

Below is the review from 2016 race when Jorge Lorenzo won the race in Italy which was a surprise and we can expect another surprise or two on Sunday, 04 June 2017.

Jorge Lorenzo has won his third grand prix this season in Italy after incredible final lap battle with Marc Marquez and Lorenzo crossed the finish line just 0.019s. This last lap will be talked about for years to come and bring you Italian Motogp results, post race interviews and full race video. 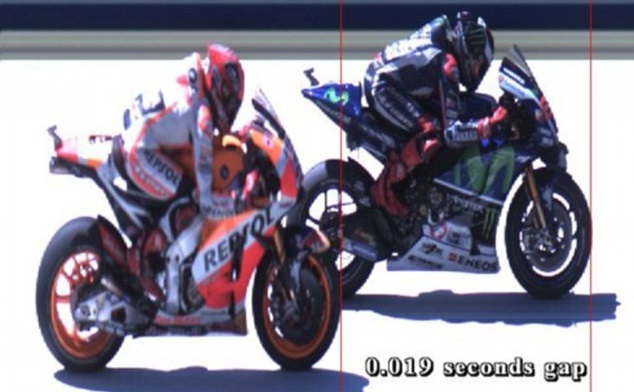 Valentino Rossi was left disapppointed after he had to withdraw early in the race due to mechanical problems with the bike but Mugello crowd were still in for a treat as Lorenzo and Marc Marquez put on a show in the final few laps. Marquez looked to have won the race in the final lap when he overtook Lorenzo but defending champion cameback stronger and won the race with the narrowest margin.

Valentino Rossi had a incredible support in his home grand prix in Mugello where thousands turned up to watch Valentino who started in pole position but his day went bleak after his withdraw due to bike problems.

Italian MotoGP Race Results:
So Lorenzo and Marcquez takes the top two podium finishes while Italian Andrea Iannone makes it to third on podium. Spanish rider Dani Pedrosa continue his fourth position  streak and below are the official results from 2016 Italian MotoGP. 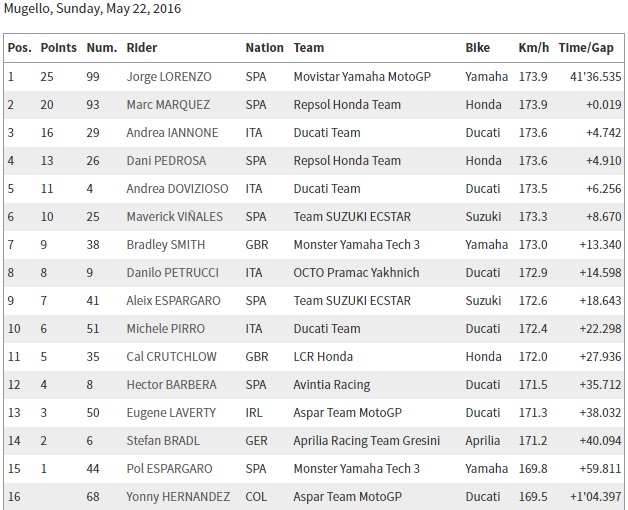 With this third grand prix win this season, Lorenzo takes his points tally to 115 points while Marc Marquez second place finish put him second in the standings 10 behind Lorenzo. Rossi was the biggest loser this weekend as he trails leader Lorenzo by 37 points.

It increasingly looking like Rossi is out of the title race now and we can expect Lorenzo and Marquez to fight it out for 2016 MotoGP world championship. Stranger things happened though and Rossi will have to make incredible/consistent comeback to stand a chance to get back in the title race.