MotoGP season moves to round 13 which will be taking place in San Marino this weekend starting with Friday, 08 September 2017 practice sessions followed by Saturday, 09 September free practice 3 and the qualifying rounds. The big race takes place on Sunday, 10 September 2017 and it will be a massive race in respect to riders championship where only thirteen points seperate the top three with Andrea DOVIZIOSO leads with 183 points followed by Marcquez who is at 174 points.

The San Marino Grand Prix gets underway on Friday, 08 September 2017 with the morning practice session followed by Saturdays qualifying and Sundays big race. As far as the weather is concerned we can expect hot conditions for a grand prix taking place in Europe during september. This weekend mediterranean european will be under the heatwave and that might play a part in the race on Sunday.

2017 San Marino GP Results: Marc Marquez won San Marino MotoGP 2015 after starting second on the grid as rain effected the race pretty much throughout from start to finish. However this weekend it is widely expected to be hot and dry and that is something bring unpredictability in the results. Misano World Circuit has signed a 4 year extension to host MotoGP Grand Prix till atleast 2020 and the circuit is also renamed after late Marco Simoncelli. 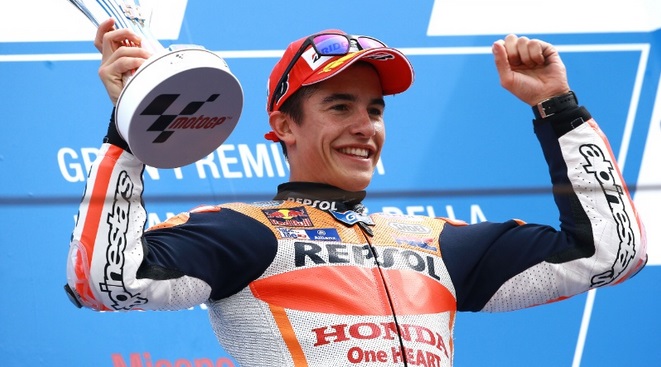 Marc Marquez has 210 points and leads the riders championship by 50 points with only 6 races left in the season.

It was the first time since 1979 that two british riders finished on the podium with Bradely Smith finishing second ahead of another Brit Scott Redding taking third on the podium. It was made possible only because Valentino Rossi suffered a tactical error during bike change while Jorge Lorenzo crashed out.

Just when it looked like Rossi has kind of blew it with a tactical error, Championship rival Jorge Lorenzo crashed out easing the pressure on Rossi in his home grand prix. In the end Valentino Rossi finished 5th and increased his lead to 23 points. 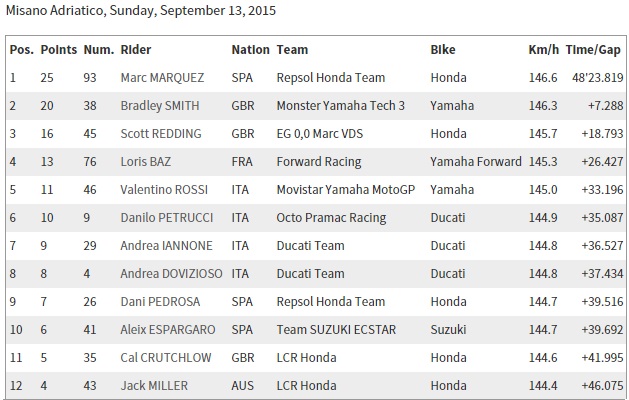 Jorge Lorenzo took the pole position for the Sunday’s San Marino MotoGP which will be the home race for championship leader Valentino Rossi. Marc Marquez also finished second on the grid with just 0.106 of a second deficit from Lorenzo and Rossi finished third behind 0.106s adrift.

Saturday, 12 September, Qualifying Results: Lorenzo, Marquez and Rossi continued their dominance as expected taking the first three places on the grid while Pedrosa and Michele Pirro finished 4th and 5th respectively. Bradley Smith was pretty good friday and saturday and finished 6th on the grid. Rest of the result from qualifying are listed below. 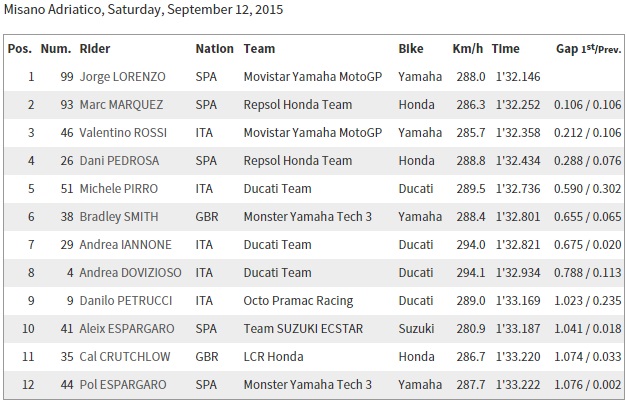