Valentino Rossi has won the 2017 Dutch MotoGP grand prix at the famous TT Assen circuit. Danilo PETRUCCI and Marc MARQUEZ finished second and third respectively. With his first grand prix win of the season, Valentin Rossi has now managed to close the gap at the top of drivers championship. Only 11 points seperate the top 4 riders as we move to German grand prix in Chemnitz next weekend the last race before the summer break.

Rossi was in control for most part in his first win of the season which takes his season tally to 108 points just 7 behind riders championship leader Maverick Vinales who failed to take any points in dutch grand prix. Below is the official result from Sunday’s race.

Full Race Replay Video: If you missed the live action, you can always tune in here for full race video which will be available couple of hours after the race.

Dutch MotoGP at famous TT Assen circuit this week (23 to 25 June 2017) will be the 8th grand prix of the season and with only 36 points separating the top 6 riders this race holds significant importance moving forward in the season. Vinales leads the championship table with 111 points followed by Andrea Dovizioso (104) and Marc Marquez (88). This weekend’s Dutch MotoGP coverage begins on Friday morning at around 08:00 am uk time.

Jack Miller won the MotoGP grand prix here last season and we can expect another surpring result as the things been panning out this season so far. Maverick Vinales will be hoping to stretch his lead at top of the drivers championship with fourth grand prix win of the season but the likes of Marquez and Andrea Dovizioso looks in fine form. Valentino Rossi has yet to win a grand prix this season but he is still in contention as far as riders championship is concerned. 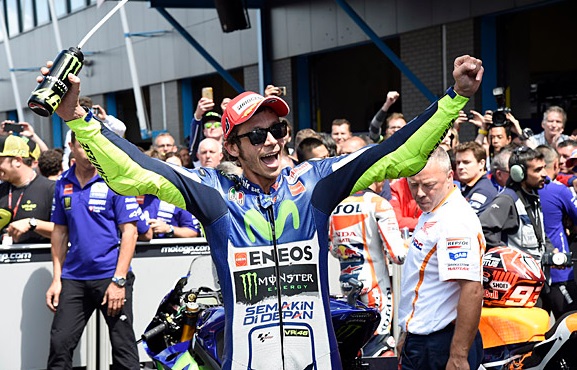 Valentino Rossi won the 2015 MotoGP grand prix and he will be eager to replicate his success this weekend.

Last year it was Valentino Rossi who triumphed at this circuit leading from start to finish and he will be eager to get another win under his belt to keep the pace with the top two of Marquez and Lorenzo.

Netherlands MotoGP 2017 – Race Results & Highlights: Once the race is over we will immediately place the full official results and how the championship table looks after dutch motogp. Currently Marc Marquez is leading going into the netherlands gp. If you missed the live action of the qualifying and race this weekend you can always tune in here for extended replay videos posted here after the race.

TT Assen MotoGP – Qualifying Results:
Valentino Rossi will start at the pole position while team suzuki’s Aleix Esparago will start second at the grid ahead of Marc Marquez who finished third in the qualifying. Jorge Lorenzo finished 8th and he has alot of work to do to get into the top 3 on the podium after the Netherlands motoGP. Here are the official results from qualifying round.

Dutch MotoGP 2016 Review: Jack Miller has won the 2016 Netherlands MotoGP gand prix in TT assen after stormy weather forced a restart. Marc Marquez took the second place while Scott Redding made it to the podium in third place. Valentino Rossi and several others crashed out in slippery conditions just after the 12 lap restart.

Dutch MotoGP keeps its traitional of surprising results and we had just that with three new winners in Moto3, Moto2 and MotoGP this weekend. Weather and track conditions played a big part but take nothing away from the winners and podium finishers considering some of the more experienced crashed out.