Arsenal has kind of turned the tables and are on a great run of form in premier league overtaking Manchester United to the third place now after beating Crystal Palace on the weekend. Their next match is against french outfit AS Monaco who they will be playing for the very first time in competitive European competition but Arsene Wenger is no stranger to Monaco as he managed them for 7 years back in late 80s and early 90s before leaving for Japan and taking over Arsenal couple of yeas later. On paper this is a tie where Arsenal should get through if we look at the form and players at Arsenal disposal but Monaco do have some quality players who can upset Arsenal on their day. here is a short preview and team news from both camps.

Monaco finished top of their group in the champions league group stages with 11 points while Arsenal finished runners ups behind Borussia Dortmund in their group. Monaco are currently fourth in the French Liga1 table and they will be sweating on the injury worries over veteran defender Ricardo Carvalho & Tiemoué Bakayoko while Andrea Raggi is out for another couple of months.

Arsenal on the other hand also have some injury worries regarding Aeron Ramsey who is likely to miss the home tie against Monaco, while, Mathieu Debuchy, Abou Diaby and Mikel Arteta are out for another month or so. But there is some encourging news as well with Jack Wishere and Alex Oxlade-Chamberlain are both training and might feature in the game against Monaco. We will get more teams here 1 day before the match so please check back later.

The confirmed team lineups will be announced an hour before the match on wednesday night so we will update this page than, here is our predicted lineups of both teams for this game at Emirates this wednesday night. 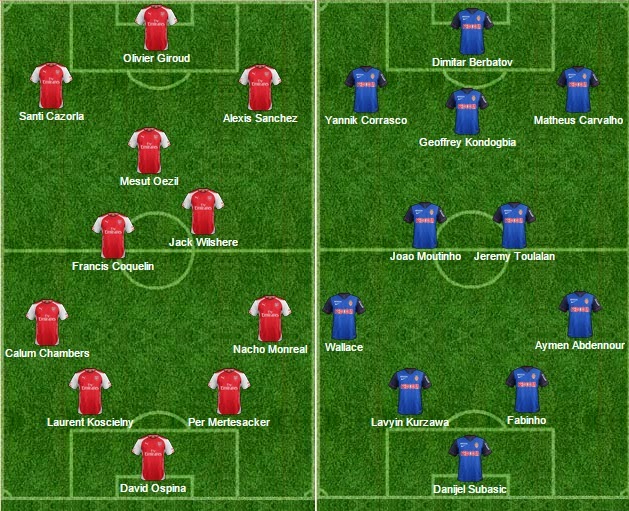 Its a 50-50 tie but since the first leg is at home for Arsenal, they will be slightly favorites also considering the form they are in at the moment, I can see them getting a lead to France for the second leg. I am going with a good 3-1 win for the home side at emirates in the first leg. What you think of this tie ? Can Arsenal keep their great run of form going ? let me know your thoughts in the comments below.