Premier League is getting towards the tail end of the season and with just either games to play three of the top 4 positions are up for grabs as Man City, Arsenal, Manchester United and Liverpool fighting it out for the coveted top four finish which will ensure UEFA Champions League football next season. Couple of weeks ago Manchester United secured a massive win against Liverpool who are now 5 points behind United for the fourth place and this week Liverpool will play another big game against Arsenal at Emirates and this is pretty much a must win game for the away side where is a short preview and likely starting lineups of both teams.

Both teams will be looking to have their players back in one piece after international break as far as Liverpool are concerned Martin Skrtel and Steven Gerrard will be suspended for next three games as Skrtel was banned after premier league official saw the video footage after United game where he stamped on De Gea while Gerrard saw straight red after coming on as a sub. But Daniel Sturridge should be fit to play for Liverpool alongside Raheem Sterling.

While Arsenal are likely to have full squad fit for this crunch game only absentee will be Mikael Arteta who is out for long term injury. Olivier Giroud is expected to start alongside Danny Welbeck and Alexis Sanchez while Ozil,  Francis Coquelin and Ramsey should start in midfield. here is how both teams are expected to lineup.

Possible Starting Lineups of Both Teams:

Arsenal might go with Ozil in the starting lineup instead of Danny Welbeck which means Francis Coquelin, Ramsey and Cazorla playing central midfield roles and Liverpool will be hoing to get Lucas in the midfield alongside Henderson while Lovran expected to replace skrtel in defense. 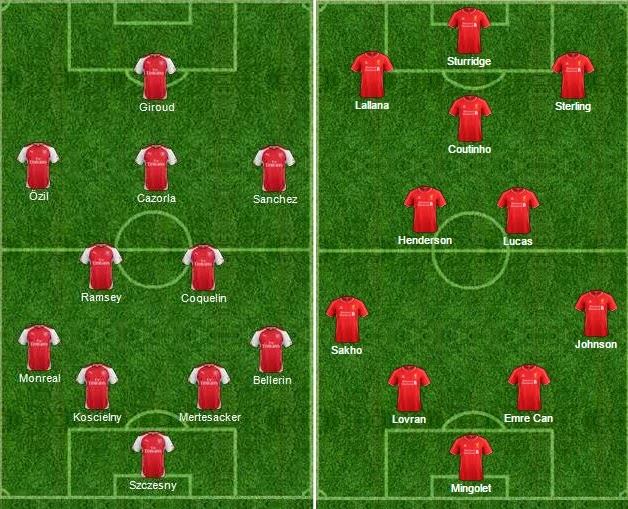 A touch one to call, Arsenal have been in sensational form and they will be looking to catch City for the second place while Liverpool’s superb run of form since the start of 2015 came to an end against United but they should take heart from their second half performance where they played with 10 men but still took the game to United.

Olivier Giroud holds the key in the game, his finishing has improved dramatically and thats one of the reason Arsenal are winning so many games of late. I can see Arsenal getting a win here and putting Liverpools chances of champions league qualification to bed.