Olivier Giroud gave Arsenal 1-0 lead in the opening 15 minutes at Selhurst Park against Crystal Palace but a surprising goal from Joel Ward made it 1-1 at the stroke of half hour mark. The game was pretty open and Palace gave it a real good go at Arsenal defense in the opening exchanges.

Arsenal Managed to win the game with help of an own goal by Damien Delaney in 55th minute and bagged their first three points of the season.

Short Match Preview & Team News: Welbeck, Wilshere and Rosicky will all miss with knee injuries till the end of september but apart from that Arsene Wenger has a full squad to choose from. We can safely assume that Alexis Sanchez will start the game with Giroud leading the forward line. Ramsey and Ozil to start in advance midfield roles with Cazorla and Coquelin starting in deep midfield roles. Nacho Monrea set to return to starting lineup having sit out against West Ham.

Crystal Palace on the other hand have some injuries of their own as former Arsenal player Chamakh and Speroni alongside Appiah to miss the Arsenal visit. Murray to start as a lone striker while Zaha and Bolasie to start on the wings. Johan Cabaye set to play in the central midfield.

Possible Starting Lineups:
This is how I expect both teams to lineup on Sunady. Confirmed team news will be available closer to the kickoff. 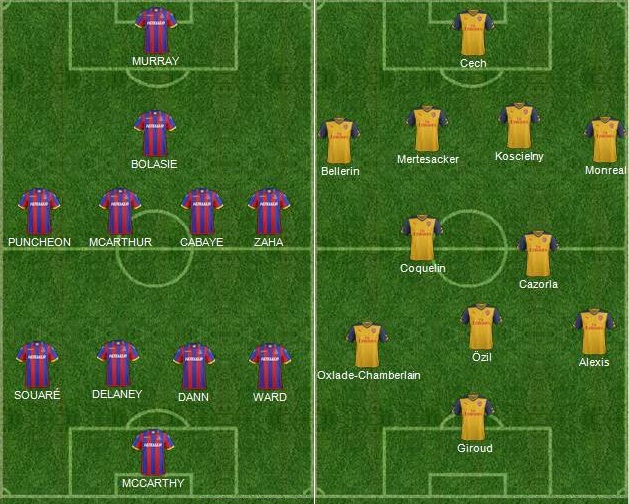 Match Predictions: Arsenal can not afford to drop points again but this will be a difficult trip and we Wenger will be setting up his team more carefull in the midfield with to counter Crystal Palace threat. With Sanchez Arsenal does look like a different team and he is set to start his first game of the season and I can expect him to be the difference between the two sides. Arsenal to win this one with a 2-1 win and claim their first three points.

Crystal Palace vs Arsenal Live Stream: The match will be broadcasted live on SkySports 1 at around 13:30 uk time and we will have the live action of this game right here 1 hour ahead of the kickoff with free live streams. plus a couple of alternative links as well.

Match Highlights: After the game you can watch extended match highlights of this match here plus BBC motd video footage of 15 minutes later in the night.