The Merseyside derby is one of the most fearse derby in english football when blue half of the city takes on red half  in what is always a emotional match not only for the players but for the fans as well. Liverpool city police were trying to postponed to the match to later dates with concerns over security but Premier League has given a nod for match to go ahead. In the last 10 matches played between the two teams in premier league Everton only managed to win once while Liverpool dominated the local rivals in premier league derby by winning 4 and drawing 5 of the last 10 matches.

Everton will host arch rivals Liverpool at the Goddison Stadium in late kickoff Saturday evening 09 February 2015. Roberto Martinez side has been poor after their staller showing last season where they finish in top 6 of the league. But things has gone downhill since the start of 2014-15 season as Everton has only managed to win three home matches in the opening 12 games played at Goddison park which is the big cause of Evertons slump this season. Just like city rivals Liverpool also struggled to build on to their last season 2nd place finish, However Brendon Rodgers side is starting to regain a bit of form as they have won 5 of the last 6 matches drawing just 1 and now pretty much back in contention with top 4 finish. here are some interesting statistics for both teams.

Everton are set to welcome new loan signing Aeron Lennon who joined the club from Spurs and he will be available for selections while Kevin Mirallas is likely to be fit enough for the start while James McCarthy has been ruled out with another injury setback. But Sylvain Distin and Darron Gibson are likely to be in the squad against Liverpool. Ramelu Lakuku is set to spearhead the attacking and he likes playing against Liverpool having scored for West Bromwhich Albion and Everton against Liverpool.

The big news is that Danial Sturridge is fit enough to start the game against Everton but will Rodgers use him in the starting lineup is another matter as he might not want to risk the forward. Mario Balotelli set to miss the game while Philippe Coutinho and Raheem Sterling are sure to start the game. Steven Gerrard started against Bolton in the midweek so he might benched as Rodgers will be looking to use rejouvinated Lucas in the midfield role. 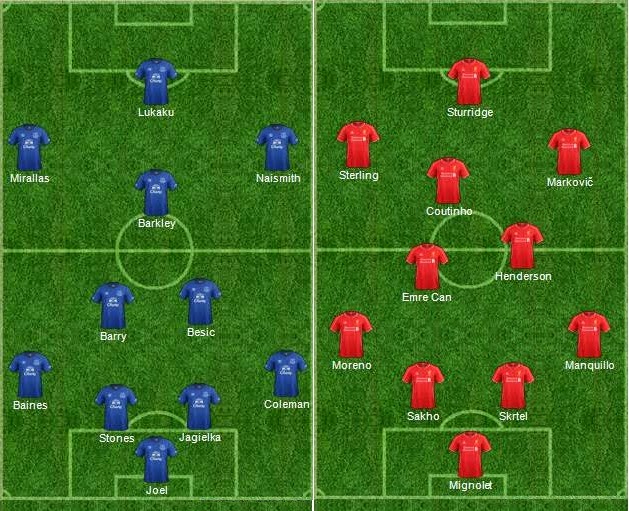 Liverpool are playing some solid football of late and they have some of the injured players back in the squad and summer signings finally starting to show their grip of the game as they showed winning 5 of last 6 premier league games while Everton have been poor at home and Liverpool have a decent record in away games. So everything points to a good game with Liverpool winning all three points.

But when the two meet earlier in the season even though Liverpool were much the better side throughout the game, Everton secured unlikely point with late goal by Phil Jagialka. Everton will need much more than that to stop Liveprool getting somthing out of this match. I am going with a 2-1 win for liverpool.