British fighter and IBF walterweight champion Kell Brook will make his third defense of the title against Diego Chaves on 24th October 2015 in his hometown Sheffield. SkySports are likely to broadcast the fight with PPV event and undercard fights will be announced in a couple of weeks time.

IBF welterweight title holder Kell Brook is set to take on Diego Chaves on 24th October 2015 in his hometown in Sheffield arena in what will be his biggest title defense since winning IBF walterweight crown in 2014 against Shawn Porter. Diego Chaves is certainly a upgrade on his recent title fights against Jo Jo Dan and Britains very own Frankie Gavin, Chaves earned a respectable draw against Timothy Bradley earlier in the year while last year he lost via disqualification against Brandon Rios. He also has Keith Thurman on his CV and widely regarded as a touch and rough fighter who can hold his own against anyone.

Looking at the career statistics of both Kell Brook and Diego Chaves we can safely assume that Kell Brook will be favourite in this fight specially since he is fighting in his own backyard. Chevez is no mug and he will bring intensity and alot of power but his recent record (1-2-1) shows that he has past his prime. 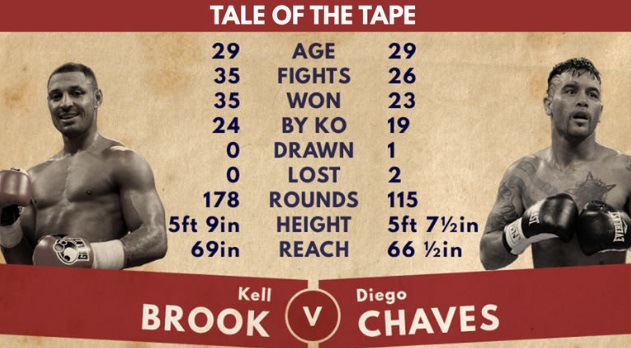