Cracking game of football saw Liverpool came from 3-1 down to win the match and tie against Dortmund by 4-3 in what was a electric atmosphere at Anfield. Liverpool now qualify for the semifinals of 2016 europa league alongside, Sevilla, Shakhtar Dontesk and Villarreal.

Jurgen Klopp side Liverpool were humbled at home when Borussia Dortmund ran riot in the opening 10 minutes of the game and took 2-0 lead which looked to have ended Liverpool’s hope of qualifying for the semifinal stage. Henrik Mkhitaryan and Pierre-Emerick Aubameyang scored in space of 4 minutes to put Dortmund 2-0 up but Liverpool hit back after the break and momentarily looked to cause problems but Reus second half goal restored 2 goal lead for away side. Coutinho and Sakho scored to setup grand stand finish where Dejan Lovren’s injury time winner put Liverpool in the semifinals.

Electric atmosphere at Anfield after the game:

Absolute cracking game at Anfield saw Liverpool coming from behind to win the game and tie against Borussia Dortmund and made their way into the semifinals of 2016 Europa League. Coutinho, Sakho and Lovren scored late in second half to turn things around from 1-3 down to 4-3 win for Liverpool.

Liverpool needed just a 0-0 draw to qualify but Klopp was left furious as they leaked two early goals inside 10 minutes pretty much hand the tie to Dortmund. Liverpool pressed higher up the pitch which was a bizare tactic considering Aubameyang and Reus pace upfront. 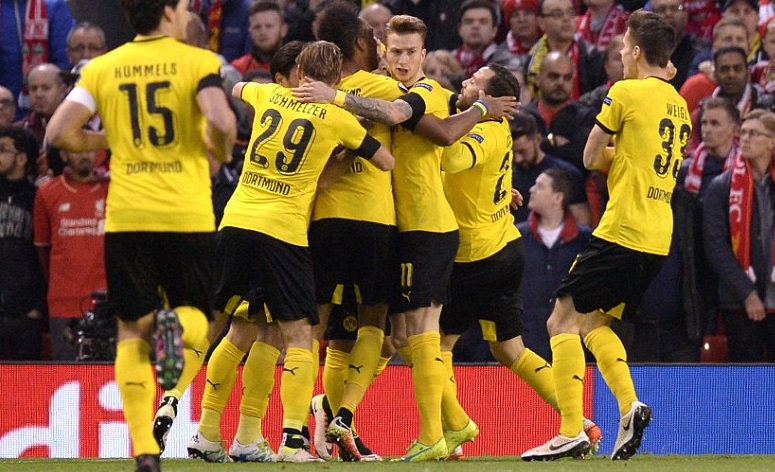 Divock Origi scored just after the break to bring Liverpool back in the tie but their slim hopes of revival were dashed when Reus was put through on goal and he scored with a superb finish to make it 3-1 on the night and ended the contest.

Divock Origi’s second half goal got Liverpool back in the game and that was sign of things to come for later part of the night. After Reus put Dortmund 3-1 up, Liverpool bounced back with goals from Philippe Coutinho and Sakho to make it 3-3 on the night and it took second minute of injury time for Liverpool to score the winner when Dejan Lovren headed home from the far post.

Much anticipated clash between Liverpool and Borussia Dortmund started with a pretty good tribute for Jurgen Klopp at the Signal Iduna Park on thursday night. Dortmund dominated the game in terms of possesion but it was Liveprool who took the lead when Divock Origi scored with a neat finish. 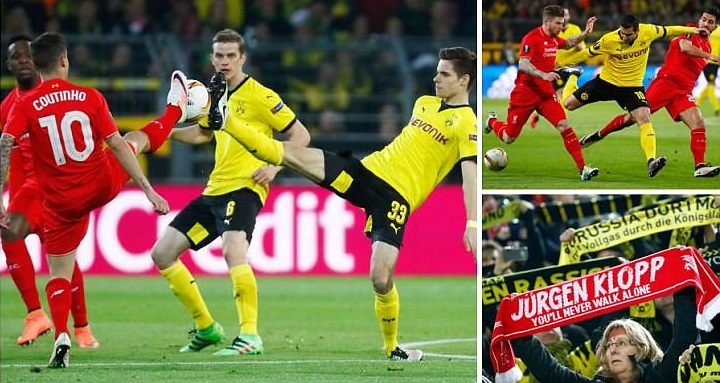 Jordan Henderson’s flick on header put Divock Origi through on goal who scored with a low shot passed Roman Weidenfeller in 36th minute to put Liverpool 1-0 up.

Mats Hummels equalized for Dortmund just after the break. Dortmund produced a short corner routine and Henrikh Mkhitaryan crossed it inside the box where Hummels over-jumped Lallana to head home the equalizer.

Match Preview: Klopp’s former team Dortmund stand in Liverpool’s way as he takes on his former team for the first time since leaving last summer. Klopp won two back to back Bundesliga titles for Dortmund and taking them out of oblivion after such a longtime. Liverpool fans will be hoping he can turn things around for his new club as well as he tackles Dortmund in the double header of Europea League clash in 7 days time.

Thomas Tuchel who is Klopps replacment at Dortmund has been sensation in his first season having guided Dortmund to a very respectable second place in Germany Bundesliga behind Bayern while they also qualified for German cup semifinals and now he will be hoping to get one over Klopp and qualify for Europa League semifinal. Its all set for a massive 7 days for both clubs. Dortmund made easy work of Tottenham in round of 16 when they got a 5-1 aggregate win while Liverpool saw off challenge from Manchester United winning 3-1 on aggregate.

Team News & Lineups: Liverpool will have Roberto Firmino back in the squad but might be benched while Coutinho, Lallana and James Milner to start behind Sturridge. Lucas Laiva and Skrtel are doubtful and might not feature. Henderson and Can to play in central midfield roles.

Dortmund on the other hand will have their captain Mats Hummels back in the starting lineup alongside Lukas Piszczek, Ginter and Marcel Schmelzer in back four while Weigl, Castro and Erik Durm to start in midfield roles with Henrik Mkhitaryan, Marcus Reus and Aubameyang playing in attacking roles.

This is how I expect both teams to lineup on Thursday night. 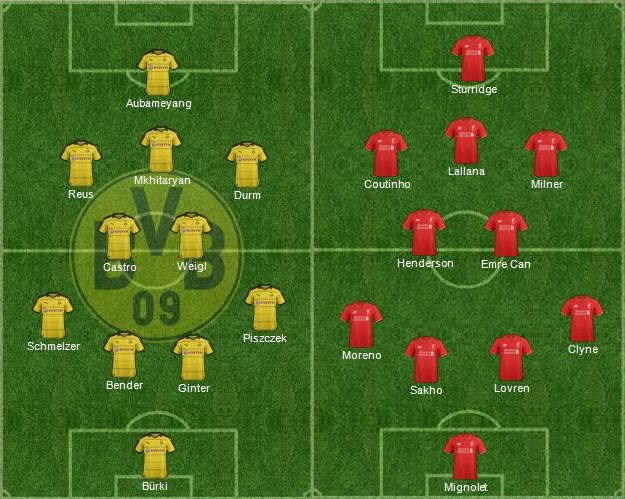 Predictions: Dortmund will be slightly favourite going into the double header against Liverpool but since second leg is at Anfield that might prove crucial specially if Liverpool managed to get a decent result Westfalenstadion in the first leg. I am going with Liverpool to qualify for semifinals with a narrow margin over the two legs.