Manchester City defeated Newcastle United by 5-0 on saturday evening and prepared themselves for the first leg of their round of 16 clash against Spanish giants FC Barcelona who suffered a shock defeat in hands of Malaga. The first leg will be played at Etihad Stadium, Manchester this tuesday 24 February 2015.

Both teams will be locking horns for the second successive season in champions league as they meet at the same stage last season where Barcelona came out 4-1 winners on aggregate with Barca winning Manchester by 2-0 in the first leg and also got a 2-1 victory at home (Nou Camp) in return leg.

Not much has change since than as both teams are in the mix for the title race in their respective leagues while in Europe its still early days for Manchester City while Barcelona consistently qualify for the later stages of the champions league year after year. Here is a short preview of the first leg to be played this Tuesday night in Manchester and possible starting lineup and team news from both camps.

Manchester City warmed up with a impressive 5-0 win over Newcastle United with Dzeko and Aguero starting upfront while David Silva & Samir Nasri starting in advance midfield roles with Fernandinho & Yaya Toure taking anchor roles in central midfields. James Milner was ruled out for the game against Newcastle United and he is likely to miss out again against Barcelona. Rest of the squad is fit and available for selection.

Barcelona on the other hand started with their strongest forward line as all three Messi, Neymar and Suarez started in the game against Malaga while Rafinha (replaced by Ivan Rakitic 63’minute) and Ineista (replaced by Pedro Rodriguez 71’minute) played in midfield alongside Sergio Busquet. Barcelona dont have any major injury worries so Luis Enrique is likey to start with Suarez, Neymar and Messi upfront and Rakitic Starting in midfield role with Busquest while Iniesta pulling the string from midfield. here are our predicted lineups of both teams for first leg this tuesday.

The confirmed lineups will be available shortly before the match here are our predictions on how both teams will lineup at Etihad Stadium, Manchester. 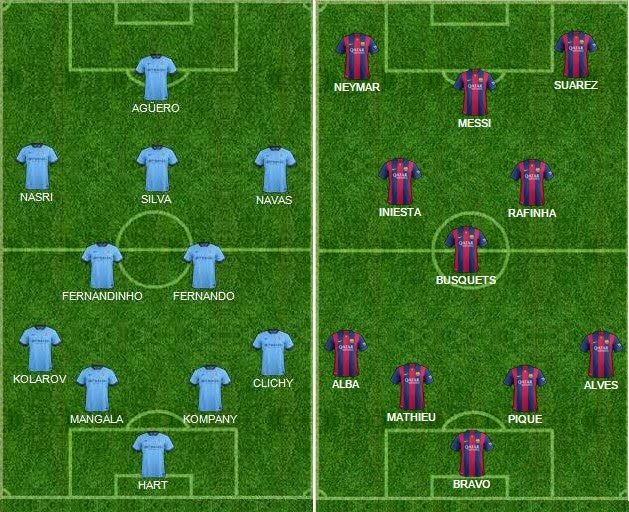 Barcelona looked like a new team since the start of 2015 and they have been scoring goals for fun in spanish La liga but the game this weekend against Malaga kind of exposed them to a well organized defensive unit and counter attacking football which Manchester City possess in abundance.

City have been hit and miss this season, sometime they turn up and thrash even the good teams and sometime they are lackluster but their european tie will surely get the best out of players and with results of last against barcelona still fresh I expect them to give a right run for money to Barcelona. I can not see City losing this one and I am going with a narrow win for City 2-1 which will be a decent lead to take to Barcelona in three weeks time.