Next week is a massive matchday in premier league as top 4 race hots up with Manchester United travel to face Queens Park Rangers and Southampton visit Newcastle United but the pick of the game this week is between title challengers Manchester City top four hopefuls Arsenal. The game will be played at City’s Etihad Stadium on Sunday, 18th January 2015 and it will be broadcasted live on SkySports in United Kingdom.

[dropcap]Man City has already signed their first player of January window as Wilfried Bony joins City on a 4 year deal which will see him earn 100,000gbp a week and he is likely to go straight into the starting lineup against Arsenal. Sergio Aguero will still be missing through injury while Steven Jevotic will be relegated to the bench[/dropcap]

Arsenal on the other hand will be hoping that Alexie Sanchez keeps his superb run of form going, while Wenger will be looking to use Danny Welbeck pace to counter at Etihad Stadium which means Olivier Giroud won’t start the game against City.

Following is the predicted lineup for Manchester City against Arsenal, but the confirmed lineups will be announced 2 hour before the kickoff. 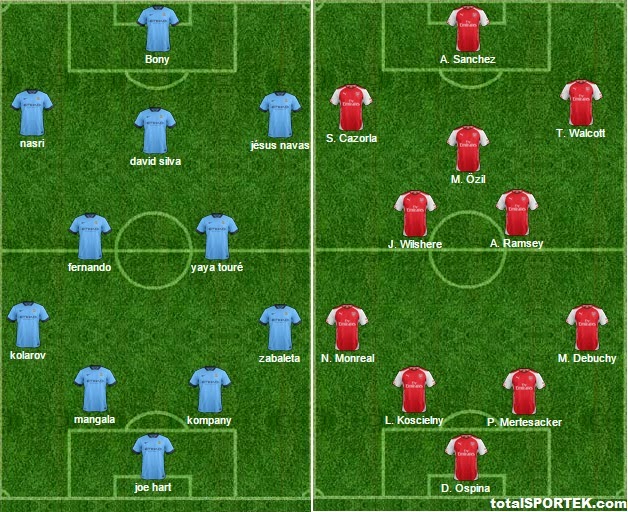 Arsenal has started to play decent football in the recent couple of weeks but their low point is always the fragile defense and keeping problems. On the other hand City has been fantastic even without their talisman Sergio Aguero as they have not only closed the gap to chelsea but also playing good football.

Going into the Arsenal game they are sure to be favourites, specially since they are playing at home and new signing Wilfried Bony will give them and extra edge on the visiting side. Arsenal on the other hand have most of their players back from injuries and Mesut Ozil and Walcot are likely to start alongside Cazorla, Ramsey and Jack Wilshere.

Looking at both teams I can see City slightly favorite and in better shape and there will be goals in this game like always this fixture has produced some fantastic high scoring matches. Last league game between the two at Emirates finished 2-2 but I can see City nicking this one. What you think of this match ? can City continue their recent great run of form ? let us know your thoughts by using the comments below.