Manchester United has made a superb start to the premier league without being convincing in the opening two matches. Van Gaal side are looking very soild in the midfield and defense departments but its the attacking options which lacks depth and creativity. During the midweek they will be playing probably the most important match of the season when they take on Club Brugge in the champions league playoff 1st leg at Old Trafford. The game will be played on Tuesday, 18th August 2015 and here is a short preview and possible starting lineups.

Short Match Preview & Team News: Manchester United has announced their Champions league playoff squad and they have included David De Gea in the 28-man squad but we can safely assume he won’t start the game against Brugge. The champions League group stage place is what at stake when Club Brugge visit United in what will be their first ever game against United at Old Trafford and since the stakes are high United will be hoping not to get off guard in such high magnitude encounter due to lack of fitness and playing time.

Adnan Januzaj is expected to start for United against Club Brugge after his match winning goal against Villa.

United are likely to go with the same starting lineup against Brugge, which took the field against Villa on Friday night only possible change might be Bastian Schweinsteiger coming in the starting lineup instead of Michael Carrick to give more mobility in the midfield.

Club Brugge are not pushovers, they have made it to the the group stages 5 consecutive times from 2008 to 2013 and last season they reached quarter finals of Europa League. Belgian outfit has improved alot in terms of qualify in the last few years but they have never beaten and English side in England on 11 previous encounters losing 8 and drawing 3 and the last time they beat and English side was back in 1994 in UEFA Cup game against Chelsea.

Possible Starting Lineups: Louis Van Gaal might use Young on the left flank instead of Depay to provide more protection for Luke Shaw while Schweinsteiger might start in place for Carrick and after goal scoring return to starting lineup against Villa Januzaj should start in no.10 role behind Rooney or Depay. 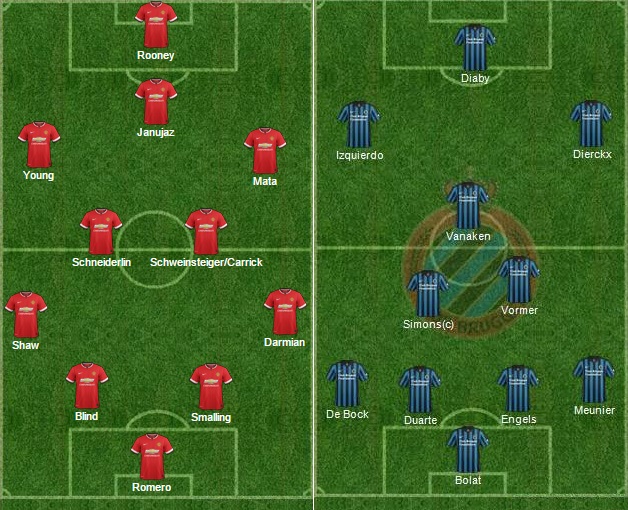 Match Predictions: Club Brugge are a decent side and they can pose problems for United on the counter attacks but Louis Van Gaal side should have enough firepower to see off the challenge from the Belgian outfit. United can not afford to miss out on champions league for second season in a row which might turn out to be a disaster as Adidas has invested alot in the 10 year contract (with a clause if United fail to reach champions league in 2 consecutive seasons the yearly financial terms of kit deal will be reduced by 25%). Plus United will miss out on huge hike in UEFA prize money available to top clubs specially for England if they won’t reach champions league.