How Manchester United will lineup against Spurs in their opening fixture of 2015-16 season ? Will Pedro will joing United just in time, De Gea to start in goal ? will it be a 4-3-3 or 4-5-1 system ? here is our short preview, team news and possible starting lineups of both teams.

Manchester United are set to start their 2015-16 premier league campaign against Tottenham Hotspurs on the opening day fixture which will be the early kickoff on saturday, 08 August 2015. Its a massive game for Manchester United as they will be hoping to start their competitive season with a win unlike last year when they lost against Swansea in the opening match and only accumulated 13 points of first 10 games. Van Gaal can not afford another sluggish start but he do have some selection headache going into the spurs game.

Man Utd: Van Gaal has kind of already revealed the system United will play heading into the new season which will be 4-3-3 used in the second half of last season and during the recently concluded US tour. Van Gaal expressed his desire to use 4-3-3 system and he is fairly satisfied with how the team responded with the current system during US tour.

Update: Louis Van Gaal has dropped David De Gea from the opening fixture squad and it is likely that new keeper Romero or Sam Johnstone to start in goal. Both Romero and Johnstone has been named in the squad and Johnstone featured in all 4 pre-season friendlies for United

Which means Depay, Rooney and Mata (Pedro if transfer goes through this week) are likely to start as front three while new signings Morgan Schneiderlin and Bastian Schweinsteiger are expected to start in midfield possible alongside Ander Herrera to give central midfield more mobility. Darmian and Luke Shaw are expected to start as full backs while Daley Blind or Carrick might start in central defense roles alongside Chris Smalling.

Tottenham on the other hand changed their transfer policy under manager Mauricio Pochettino who got rid of under performing players like Paulinho, Etienne Capoue, Benjamin Stambouli, Younes Kaboul and Vlad Chiriche while brought in Kieran Trippier, Kevin Wimmer and Toby Alderweireld.

Man United & Tottenham Possible Starting Lineups:
Here is how I expect both teams to lineup in the first premier league fixture of 2015-16 season. Confirmed lineups will be available couple of hours ahead of the kickoff. 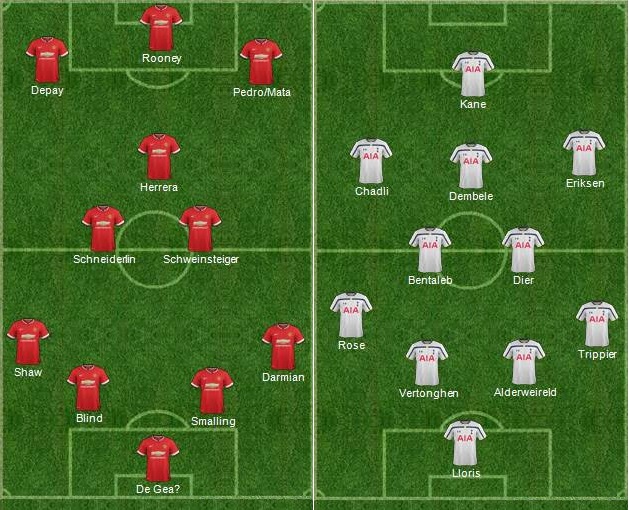 Match Predictions: United looked decent during the US tour where they defeated two american clubs before beating treble winner Barcelona 2-1 where they rode their luck but new signings Depay, Schneiderlin and Darmian had good games. Now the first competitive game against Spurs will be a massive game for everyone at the club, United can not afford to start on the backfoot like last season when they lost opening fixture. Three points at Old Trafford is exactly what is needed against a potential top four opponent in Spurs.

Spurs on the other hand has made quite a few changes but if you look at their best start lineup none of the players who departed would fit in the current system which shows they had a decent transfer window where their biggest signing has been Toby Alderweireld who can play anywhere in defense. It will be a evenly matched game and If United can get over their nervous in the opening exchanges I can see them getting the better of Spurs. I am going with a 2-1 win for United.