Chelsea were one of only three teams to go unbeaten in the champions league group stages this season alongside FC Porto and Real Madrid. Jose Mourinho men finished first in the GROUP G and winning 4 and drawing 2 matches getting 14 points. They scored 17 goals which are the highest in group stages while just conceding 3 in the six matches. Now they will take on Paris Saint Germain in the first leg of their round of 16 tie to be played in Parc des Princes in Paris on Tuesday night 17th February 2015.

PSG on the other hand were pretty impressive in the group stages where they defeated Barcelona but failed to finish top of the group and finished just behind Barcelona by two points. Last season when both meet in quarter final stages Chelsea lost the first leg in Paris by 3-1 scorline but managed to turn things around in the home tie when they secured a 2-0 win. Since than Chelsea has become a better team and they sold David Luiz to PSG on a world record fee of 50 million for a defender. here is the team news and predictions for the first leg of Chelsea vs Paris Saint Germain.

PSG are unbeaten in their last 5 games winning four and drawing 1 but defending champions of France sit third behind Lyon and Marseille in the liga 1 table and PSG will be facing Caen in the league before they take on Chelsea on tuesday night. Chelsea on the other hand have a weekend off as they are not involved in FA Cup after their defeat to Bradford, but Chelsea are running away with the title in Premier League with 59 points and leading 7 points lead to City.

Both teams have meet twice in knockout stages of Champions league the last 10 years resulting in 4 ties where Chelsea won twice and PSG won once  and drawn once. Last year Both teams won their home games but PSG got eliminated on away goals rule. 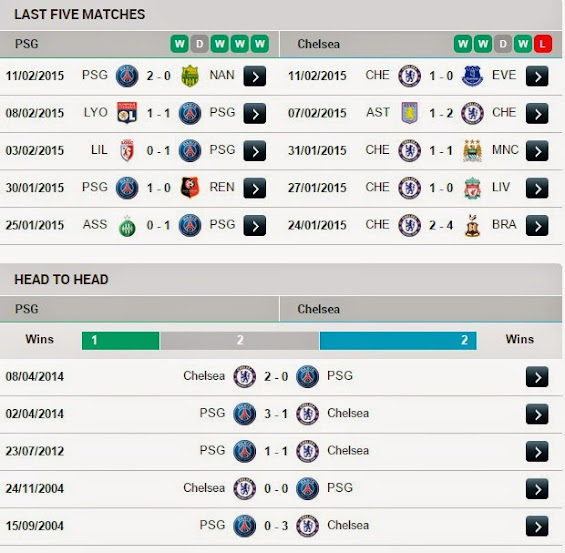 Both teams are without any major injuries but Chelsea will welcome back Diego Costa in the starting lineup after he missed premier league game last week due to suspension while Fabregas is also likely to draft straight into starting lineup after not starting the game against Everton. For Mourinho main decision is to make about who will start on the right wing position with Willian and new signing Juan Cuadrado fighting for the place.

Expected Lineups of Both Teams:

Below are the expected lineup of both sides going into the tuesday night european clash, while confirmed lineups should be available 1 hour before the kickoff at around 19:00 GMT 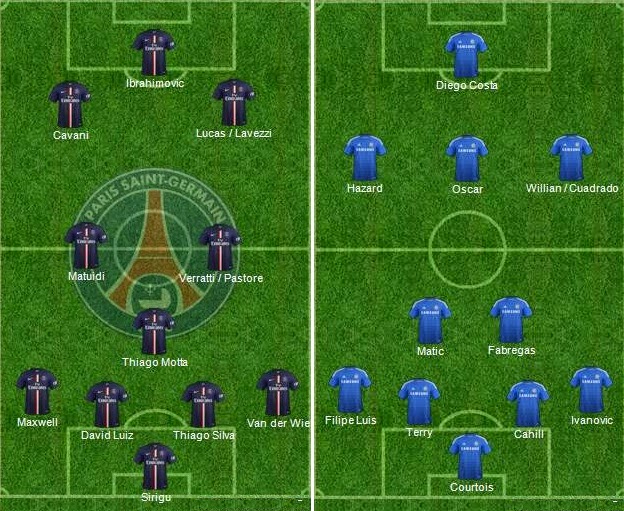 Jose Mourinho is hoping that his team should atleast get a draw from Paris but they way both teams are playing I think Chelsea has a more than fair chance of winning away from home against PSG. Mourinho of course is likely to setup his team with defensive system with Matic, anchoring the back four while Willian supporting fullback to defend. PSG on the other hand will be relying on Ibrahimovic playing upfront in a 4-3-3 system where Cavani and Lucas are set to play on the forward wing positions. Verrati, Matuidi and Thiago Motta or Cabaya are likely to play in midfield roles. This game is hard to predict but with Chelsea getting a weeks rest and with whole squad fit and raring to go I am going with a narrow 2-1 win for Chelsea which will pretty much end PSG’s chances of going through.

Let me know your thoughts about the first leg, which player is likely to make the difference and which teams has the better chance of going though. Use the comments section below to shout out your opinion.