Tottenham are playing Arsenal in the premier league match this weekend which will be the early kickoff to be shown live in Uk on BT Sports and both teams are fighting it out for the top 4 finish with just 2 points and 1 league position seperating Arsenal and Spurs.

The game is set to be played at White Hart Lane in London where Tottenhan has already lost 4 matches this season and drawn 2 while winning 6 making it 20 points out of possible 36 in 12 home matches. Their form has been pretty impressive lately as they have drawn 1 and lost just 1 in the last 6 matches winning 4 while Arsenal has kind of turned things around since the festive period as they have won 5 out of their last 6 matches losing just once against Southampton (away). Here are some interesting facts about North London Derby between Spurs vs Arsenal.

UPDATE: Alexies Sanches has been ruled out for the spurs clash after Arsene wenger confirmed the news in the press conference, but last weeks win over Aston Villa which they won comfortably by 5-0 where the most encouraging sign was Mesut Ozil scoring and playing well. Danny Welbeck is also available for selection first time since 28th december 2014 and Wenger confirmed that Welbeck will be the only player change in the squad which played Villa last week.

Tottenham on the other hand Spurs dont have many injury scares and we might see a pretty much same lineup which took the field against with just one change where Nacer Chadli might start in place for Erik Lamela. below are the possible lineups of both teams.

The confirmed lineups will be available 1 hour before the kickoff and we will update right here. 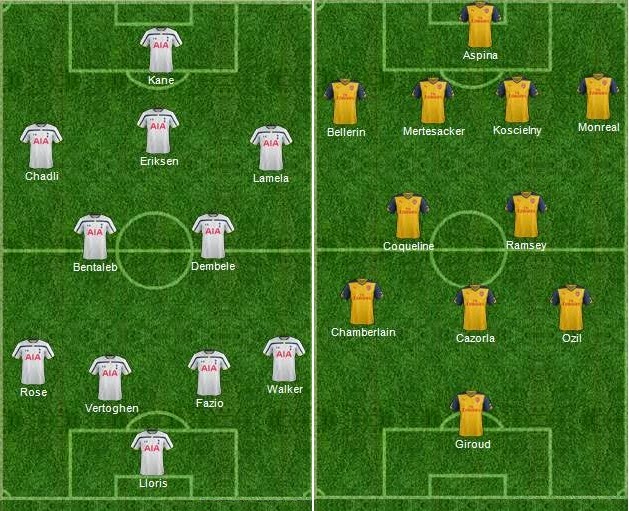 If Arsenal are without Sanchez and Spurs bring their A game with Erikson, Kane and Chadli causing havoc in Arsenal defence I can see Arsenal’s good run of form coming to an end. Arsenal do have their star man back with Mesut Ozil playing superbly against Villa the other week and his presense will help Arsenal not only exploit any space spurs were to offer by defending higher up the pitch but also that killer pass which can split open the defense.

Spurs are in good form and they look the most dangeroud side going forward with Harry Kane leading the line I can see them getting a couple of goals against Arsenal and that might be enough to seal a narrow 2-1 victory at the lane. What are your thoughts about the game ?