Australia wins the second semifinal against Argentina by 29-15 and setup the final against All Blacks next weekend. Argentina will play South Africa for the third place playoff.

Australia raced through to the final of 2015 Rugby World Cup where they will compete against arch rivals New Zealand in what would be a cracking game of rugby come saturday, 31st October 2015. Australia were in total control of the game against Argentina and never really looked trouble apart from occassional hickup.

Australia lead Argentina 19-9 at the half time with Argentina captain Agustin Creevy ruled out for second half. Australian dominated the the game even more after the break winning the match by impressive 25-15 margin to setup 2015 Rugby WOrld cup final against the all blacks.

Argentina put up a decent fight in first half but after the break Wallabies took control of the game as expected winning 29-15 in end. Argentian however should be proud of what they have achieved and can go a step further if they can beat South Africa in the third place playoff next friday. 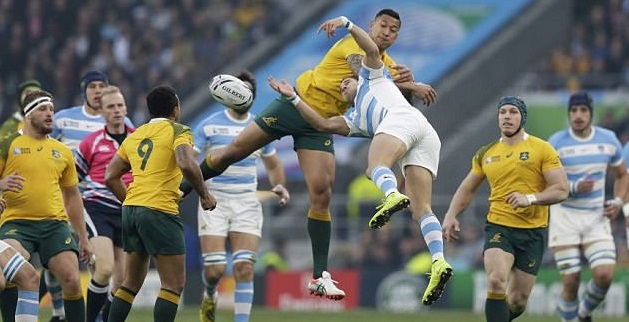 Now we all set for the biggest game in rugby with Australian Wallabies taking on defening champions New Zealand in the final of 2015 Rugby World Cup. Rugby matchs don’t come bigger than this with argubaly two of the best teams in last 4 years to go head to head for the world cup title.

With New Zealand qualifying for the World Cup final after beating South Africa in the semifinals now its upto join favourites Australia to see of the challenge from ultimate underdogs Argentina in the second semifinal to setup mouthwatering All Blacks vs Wallabies rugby world cup final. We will have the live action of this game as well as match highlightsa after the final whistle on sunday.

Australia vs Argentina Preview: Its a massive game for Australia who were tipped hot favourites alongside New Zealand to win the world cup. On paper it looks like an easy stroll in the park kind of a match for Australia but this Argentina side has something about them which will surely cause some trouble for Australia if not the heartbreak.

Wallabies confirmed lineup: Australians will have David Pocock back in the side after his injury which is a massive boost for Wallabies. They made three changes in the lineup which will take the field this sunday against Argentina.

La Pumas confirmd lineup: Argentina on the other hand has also announced their confirmed lineup for the sundays big semifinal and this is how they are going to lineup.

Looking at the head to head record Australians has upper hand as the history goes but who can forget that famous game in four nations where Argentina got their all important first win beating Australia.