Australians started the game with a try when Ashley-Cooper raced through in what was a very easy try but Scotland hit back with Greig Laidlaw penalty. Scotland shadded the first half narrowly with scores 16-15 in Scotland favour. After the break Australia pulled the plug and build up a sizable lead twice but Scotland reduced the gap and actually went ahead at 34-32 but a late mistake by Scotland awarded penalty to Australia. Wallabies went on to win the game and seal their progress to semifinals where they will play Argentina. So all southern hemishere teams made it to the last four.

Scotland were hard done by combination of unforced mistakes and couple of terrible referee decisions.

Scotland did not deserve to go out like that, they worked ever so hard to get in the lead and looked like winning the game with moments to go but a late mistake in dying moments resulting in Australian penalty and wallabies won the game with what proved to be the last kick of the game. Scotland were superb, brave and made it difficult for Australia throughout the game. 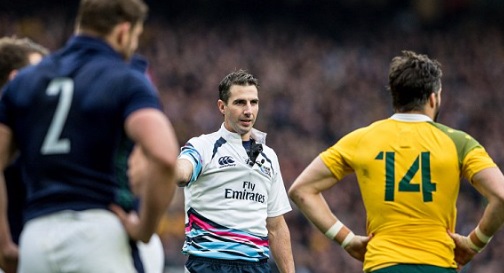 Referee Craig Joubert made couple of blunders in the game specially in the final line-out where he failed to spot a late hit on Stuart Hogg which could have made things different. We can safely assume Craig Joubert won’t be visiting Edinburgh anytime soon.

Wallabies vs Scotland Preview & Team News: Australia has couple of major injury worries with the likes of  fullback Israel Folau and No.8 David Pocock both ruled out so the alot of responsibility falls on the shoulder of new centurions duo of Stephen Moore and Matt Giteau . Kurtley Beale will be replacing experience campaigner Israel Folau which is a massive task for Beale and Ben McCalman is also drafted in the lineup ahead of Scotland quarter final.

This is the confired lineup of Wallabies for the Scotland encounter on sunday as they try to make their way into the semifinals where they will face either Argentina or Ireland.

Greig Laidlaw will be leading his side in all important quarter final clash against the wallabies and this is how they team is going to lineup on sunday.

H2H Record & Predictions: Looking at the head to head record between the two sides, Australia has dominated this fixture winning 8 of the last 10 matches between the two sides. Scotland’s only two victories in last 15 years came in 2009 and 2012 with 8-9 and 6-9 scorelines. Scotland will bring their “A” game against Australia no doubt but I just think this Australian side is too powerful and versatile for the brave scots and I can see them winning with atleast 15 points margin.