England are out of the 2015 Rugby World Cup as Wallabies inflicted a 33-13 defeat on the homeside in what was a great performances from the Australia side. Australia and Wales qualify from Pool A after this result, You can watch match highlights and reactions on this page.

Haltime Report: Australia Lead England 17-3 in the first half and it looks like a mountain to climb for England in the second half as Australia started the stronger and kept England under pressure throughout the first half.

England started the second half in great fashion taking the score to 13-20 going into the last quarter and there was a renewed hope in the England fans. But a late surge from Australia ended all hopes of any come-back from England as Australia ran out 33-13 winners on what was described as the biggest game in the tournament. This is how the pool a table looks where Wales and Australia are guaranteed qualification.

So this is it for England as far as their journey in the Rugby World Cup is concerned and Wales and Australia qualify for the next round (quarter final). England will play their last group game which is a dead rubber against Uruguay on Sunday next weekend.

England vs Wallabies Preview: England vs Wales was tipped as the biggest game in the world cup and for England since 2007 but Stuart Lancaster side fell to a narrow 28-25 defeat having lead the match most of the game. The defeat did not go too well with the English fans and media wh slatted English stars of losing against pretty much a injury stricken Welsh side. 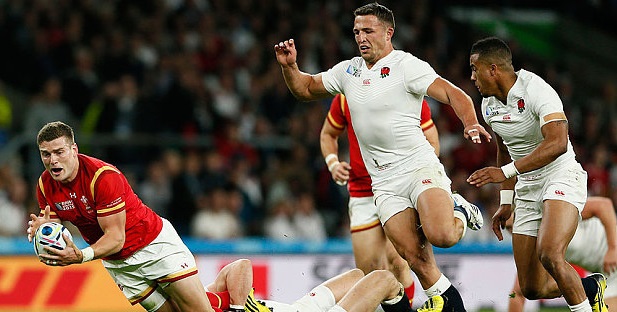 England lost to Wales in dramatic fashion by 28-25, having lead most of the game.

Now they have to play another important game agains Australia which is a must win but Welsh defeat has kind of over shadowed preparations for What will be a massive game.

Wallabies on the other hand so far played 2 and won both games quite comfortably but their next two games are very important specially the one against England where a defeat will leave them facing Wales in last group game in a must win situation. So England game serve extra motivation of rapping up the qualification to the next round with a game to spare.

Australia Lineup: Wallabies has made 14 changes going into the England match having rested some key players for the pool match against Uruguay. Captain Stephen Moore will lead the side and earn his 98th cap for the Wallabies.

England Lineup: While England also made some changes with Joseph Jonathan returning to the starting lineup in place of Sam Burgess. There are some selection headech with injuries as Billy Vunipola ruled out for Wallabies clash and Nick Easter coming up as replacement. Also Joe Launchbury and Ben Morgan start the game with Courtney Lawes missing out.

Looking at the history books England has the edge when it comes to World Cup matches having won 3 of the matches between the two sides inclucing 2003 final when Johny Wilkinson scored that famous drop-goal secured England’s only world cup title.

Predictions: England will be under massive pressure against Wallabies but if they can hold on to their nervous in the opening exchanging and settle down quickly in the game they can exploit attacking areas just like they did against Wallabies back in november 2014 match at Twickenham. The tickets are sold-out some of which even went for sale at around $4000 a piece, stadium will be full capacity, English support will be behind the team and it all sets up for a glorious night at the Twickenham. I am going with an England win in this one. Let me know your thoughts about this game by commenting in the box below.