Ireland secured the top position in pool d when they defeated France in the last group game of 2015 rugby world cup, Ireland outscored France by 24-9 in what was a very exciting game of rugby. Ireland will play Argentina in the quarter finals while France will play defending champions New Zealand in a weeks time. 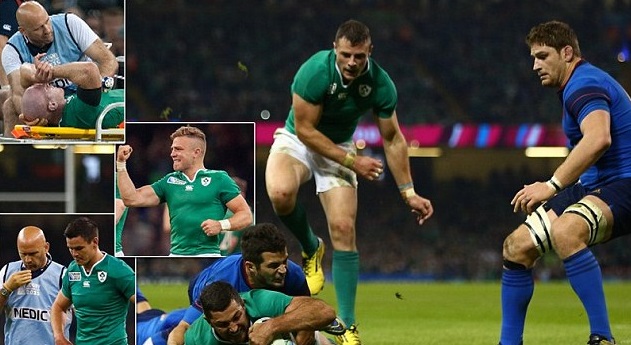 Ireland lead France 9-6 at the break but they produced a superb performance in second half to secure top spot in the group which means they will play Argentina in the quarter finals. But the victory came at a cost with both Jonathan Sexton and Paul O’Connell getting injured in first half.

Both France and Ireland have already qualified for the quarter final stage but their is alot at stake when both teams take on each other this Sunday evening pool d match. The winner of Ireland vs France game will take on Argentina in the quarter finals while losing team will have to play defending champions and world no.1 team New Zealand which is not an ideal scenario for both France or Ireland.

Ireland vs France Preview: Is a massive game for both teams considering their chance of going beyond quarter final stage. The winner of this game will play a relatively easy game against Argentina compared to losing team’s encounter against All Blacks in the quarter finals. Ireland do not have a good history against the French as far as the world cup games concerned with Ireland losing all three of their world cup encounters against France.

Ireland has announced the lineup which will take on France on sundays afternoon clash at Millenium Stadium, Cardiff. Irish captain Paul O’Connell will start and equal the most appearence record of Brian Odriscoll for Ireland.

France has made couple of changes in the starting lineup going into the sundays clash against Ireland. Louis Picamoles is brought in as he set to take his 50th international cap for France.