New Zealand defeat France 62-13 in the second quarter final on Sunday to book their place in the semifinals. New Zealand made easy work of France and now they will play South Africa in the semifinal next week in what will be a mouth watering contest.

The quarter final tie between France and New Zealand was pretty much over at the break when New Zealand lead by 29-13 and looked more likely to continue scoring. Second half proved even more one sided affair as world no.1 ranked and defending champions All Blacks blitz past France with 63-13.

Savea was the stand out player scoring three tries against France and 7 overall in the competition as All Blacks hammer French side which had nothing but a Picamoles’s try to show for.

All Blacks vs France Preview: New Zealand are coming into the quarter finals as favourites having won all four pool matches while France qualified as runnerups in the group D as they failed to beat Ireland in their last encounter. France vs New Zealand is a Rugby World Cup fixture full of history. Les Blues enjoyed two of their greatest victories in world cups against New Zealand.

2007 World Cup saw France defing the odds and beat overwhelming favourites New Zealand by 20-18 while their most memorable world cup win came back in 1999 semifinal against All Blacks when trailing at halftime by 24-10, France cameback and won the match 43-31. But back in 2011 New Zealand break French hearts winning the world cup final and their second world title while France are still without the world cup trophy.

Team News: The confirmed lineups will be announced couple of days ahead of the quarter finals and once lineups are announced we will update this page with both teams official lineups. 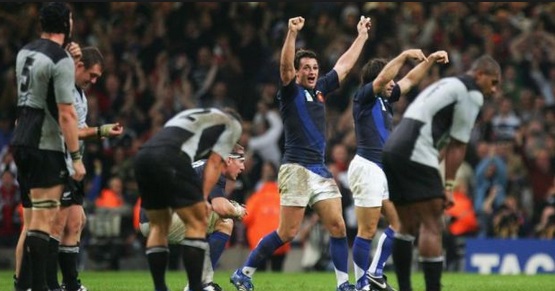 Predictions: France always seem to bring their “A” game against All Blacks and they took them to the limit 4 years ago in the world cup final in their ownbackyard but failed to finish the line as home side won the match with just 1 point margin (9-8) and that game could have gone either way. France defeat against Ireland won’t have any impact with knockout matches being totally different than the pool games. No team has defending world cup title so historically speaking New Zealand are bound to have a bad performance at some stage and France will be hoping this will be on Saturday.